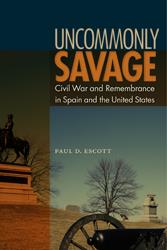 
“In crisp prose, Escott successfully shows how inertia ruled in both postwar societies, but also how change eroded continuity.”—Choice
“Breaks new ground. . . . A uniquely comparative work that looks at the two civil wars in diachronic comparative perspective.”—Journal of American History

“A useful contribution to the burgeoning scholarly literature on historical memory as a transnational phenomenon.”—American Historical Review

“Suggest[s] fruitful new directions for comparative historians: what happens in the aftermath of violent conflicts, when the guns fall silent?”—Civil War Monitor

“A fascinating study of war, memory, and reconciliation.”—Journal of the Civil War Era

“An engaging success on the theme of war and memory.”—Civil War History

“While we might think of the American Civil War as unique in a number of ways. . . Escott presents a corrective against this pervasive sense of exceptionalism.”—North Carolina Historical Review

“[Escott] presents his arguments in a fresh ways that challenges assumptions we all bring about the memory of war and its impact.”—Journal of Military History

"Truly impressive. Travels uncharted terrain, moving deftly through a vast scholarship in two languages. The research is sound, the prose crisp and accessible, and the subject unquestionably important."—W. Fitzhugh Brundage, author of The Southern Past: A Clash of Race and Memory

"Illuminates the enduring potency of memory in shaping postwar societies for generations after the fighting ceased, reminding us that both losers and victors often had powerful motives to remember--and to forget."—Caroline E. Janney, author of Remembering the Civil War

"Traces the dynamics of memory in the aftermath of the Spanish and American civil wars and demonstrates how similar processes of closure, willful blindness, and ideological inculcation worked out in the different contexts to produce sometimes similar but often radically different outcomes."—Cillian McGrattan, author of Memory, Politics and Identity

"With an engaging narrative and deep research, the book is a model of the benefits derived from a truly comparative study."—David Goldfield, author of Still Fighting the Civil War

Spain and the United States both experienced extremely bloody and divisive civil wars that left social and emotional wounds, many of which still endure today. In Uncommonly Savage, award-winning historian Paul Escott considers the impact of internecine violence on memory and ideology, politics, and process of reconciliation. He also examines debates over reparation or moral recognition, the rise of truth and reconciliation commissions, and the legal, psychological, and religious aspects of modern international law regarding amnesty.


Paul D. Escott is the Reynolds Professor of History Emeritus at Wake Forest University and author of numerous books, including Slavery Remembered, Many Excellent People, "What Shall We Do With the Negro?" and The Confederacy.

This book will certainly be useful in graduate seminars and should appeal to anyone interested in the United States, Spain, reconciliation, commemoration, or memory.
--The Civil War Monitor

An intellectual tour de force.... [that] presents a compelling... interpretation of what happens in the South after the Civil War.
--Civil War Book Review

In crisp prose, Escott successfully shows how inertia ruled in both postwar societies, but also how change eroded continuity.
--Choice

A useful contribution to the burgeoning scholarly literature on historical memory as a transnational phenomenon.
--American Historical Review

An entertaining and rather instructive read.
--Bulletin of Spanish Studies

One of the first studies on how nations reacted to the memories of civil wars. . . . Offer[s] new insights on how Americans have dealt with their internecine heritages of the Civil War.
--Florida Historical Quarterly

An engaging success. . . . This book, well-written and supported by solid evidence, contributes to comparative military history, the history of memory and commemoration, and the historiographies of both the American Civil War and Spanish Civil War.
--Civil War History

A fascinating study of war, memory, and reconciliation.
--Journal of the Civil War Era

This seminal work breaks new ground. . . . Will provide perfect background reading for future comparative works on more specific aspects of the histories of modern Spain and the United States.
--Journal of American History

While we might think of the American Civil War as unique in a number of ways. . . Escott presents a corrective against this pervasive sense of exceptionalism.
--North Carolina Historical Review