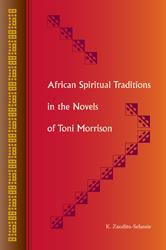 African Spiritual Traditions in the Novels of Toni Morrison

"Addresses a real need: a scholarly and ritually informed reading of spirituality in the work of a major African American author. No other work catalogues so thoroughly the grounding of Morrison's work in African cosmogonies. Zauditu-Selassie's many readings of Ba Kongo and Yoruba spiritual presence in Morrison's work are incomparably detailed and generally convincing."--Keith Cartwright, University of North Florida

Toni Morrison herself has long urged for organic critical readings of her works. K. Zauditu-Selassie delves deeply into African spiritual traditions, clearly explaining the meanings of African cosmology and epistemology as manifest in Morrison's novels. The result is a comprehensive, tour-de-force critical investigation of such works as The Bluest Eye, Sula, Song of Solomon, Tar Baby, Paradise, Love, Beloved, and Jazz.

While others have studied the African spiritual ideas and values encoded in Morrison's work, African Spiritual Traditions in the Novels of Toni Morrison is the most comprehensive. Zauditu-Selassie explores a wide range of complex concepts, including African deities, ancestral ideas, spiritual archetypes, mythic trope, and lyrical prose representing African spiritual continuities.

Zauditu-Selassie is uniquely positioned to write this book, as she is not only a literary critic but also a practicing Obatala priest in the Yoruba spiritual tradition and a Mama Nganga in the Kongo spiritual system. She analyzes tensions between communal and individual values and moral codes as represented in Morrison's novels. She also uses interviews with and nonfiction written by Morrison to further build her critical paradigm.