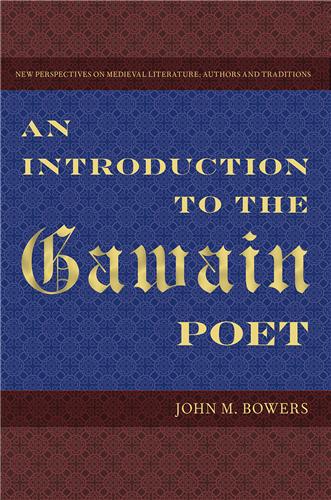 An Introduction to the Gawain Poet


"An impressive and challenging survey of the five poems attributed to the poet known as the Gawain-poet. Bowers presents the principal critical issues in Gawain, Pearl, Cleanness, Patience, and St. Erkenwald, with special attention to the poems' relation to contemporary political and social events."--J. Stephen Russell, Hofstra University

In An Introduction to the Gawain Poet, John Bowers surveys an expanded selection of the works of Chaucer's anonymous contemporary, considering Sir Gawain and the Green Knight alongside the poet's lesser known but no less brilliant works.

In addition to his succinct introductions and plot summaries, Bowers skillfully details the cultural, historical, political, and religious contexts for these works, synthesizing them with close reading of selected passages. Perhaps his most exciting contribution to the field is his choice to historicize the poet's life and works in the context of the royal culture of King Richard II, boldly contending that it was highly possible the Gawain Poet was a frequent visitor to Richard's court in London.

The final chapter surveys the works influenced by, as well as the influences reflected in, the poet's work, from the Bible to The Lord of the Rings. The attention Bowers pays to the critical tradition that has developed around these texts over the past hundred years makes An Introduction to the Gawain Poet an ideal volume for both undergraduate students and scholars of the Gawain Poet. Bowers has marshaled his formidable skills to create a book impressive in its balanced combination of breadth and depth.

John M. Bowers is professor of English at the University of Nevada, Las Vegas, and the author of five books, including Chaucer and Langland: The Antagonistic Tradition.

"Presents each of the poet's works within the sociohistorical context of King Richard II's reign, giving newly nuanced readings of each text."
--CHOICE

"Offers readers much to think about and build upon, useful points of entry into the political, religious, social and literary worlds of late medieval England. This thoughtful, interesting volume foregrounds, in the best way, the relevance and value of some of the greatest works produced in the history of English literature."
--Review of English Studies

“This book is ideal for undergraduate students, as it relives itself of a sober academic tone by contextualizing these fourteenth-century poems within the broader literary history of works such as The Hobbit and The Lord of the Rings, and by offering succinct summaries of the poems, organized at the beginning of each chapter. But the breadth of this survey and particularly the author’s ambitious study of the historical world in which the Gawain poet lived give the book value even for more advanced scholars of the poem, and make it an important contribution to the library of Gawain studies.”
--Comitatus

“A consistently engaging and richly contextualized study… of great use to undergraduates, to graduate students, and to advance scholars seeking a survey of this singular corpus of late-medieval poetry.”
--The Medieval Review