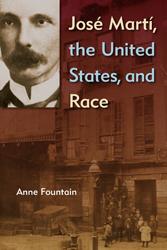 "Essential reading for those who increasingly appreciate the enormous importance of Martí as one of the nineteenth century's most influential and most original thinkers."--John Kirk, coeditor of Redefining Cuban Foreign Policy

"An engaging, comprehensive, and well-balanced book on Cuba's national hero José Martí. Anne Fountain's chapters on Martí's vision of blacks are an indispensable source of information for anyone interested in the topic."--Jorge Camacho, author of José Martí: las máscaras del escritor


A national hero in Cuba and a champion of independence across Latin America, José Martí produced a body of writing that has been theorized, criticized, and politicized. However, one of the most understudied aspects of his work is how his time in the United States affected what he wrote about race and his attitudes toward racial politics.

In the United States Martí encountered European immigrants and the labor politics that accompanied them and became aware of the hardships experienced by Chinese workers. He read in newspapers and magazines about the oppression of Native Americans and the adversity faced by newly freed black citizens. Although he'd first witnessed the mistreatment of slaves in Cuba, it was in New York City, near the close of the century, where he penned his famous essay "My Race," declaring that there was only one race, the human race.

Anne Fountain is professor of Spanish and Latin American studies at San José State University and the author of José Martí and U.S. Writers.

Expands our understanding of the importance of Martí’s exile in North American beyond the standard milieu of Cuban independence; rather, it finds within the context of Martí’s observations and experiences in the United States the core influence for much of his position on slavery and race--Fountain’s central argument gives new and valuable insight into our understanding of Martí’s authentic push for the unification and liberation of Cuba. In turn, her book opens a door to comprehending an oft underappreciated, but crucial facet of the life and writings of Jose Martí.
--La Habana Elegante

Deserves the attention of all those who are interested in José Martí, in the history of the USA and of Cuba in the nineteenth century.
--Iberoamericana

Recommended for students and those interested in expanding their knowledge about historically evolving race relations.
--Colonial Latin American Historical Review

Provides a focused, comprehensive examination into how Martí’s time in the United States directly shaped his hemispheric vision of race.
--Latin Americanist

Pulls together socio-history, the dynamics of race and racism, national politics, the politics of identity and colonialism, and issues of liberty and nationhood to craft a narrative which offers a slice of the tale of Martí’s life and times.
--Caribbean Quarterly

A book that deserves to be on the shelves of most libraries. Scrupulous, sympathetic, with copious but unobtrusive notes, and with occasionally muted criticism of Martí, it deepens our knowledge of this area. Anne Fountain not only contributes to our understanding of Martí on race but also throws new light on the poetry and creative writing of this writer and martyr.
--Hispania