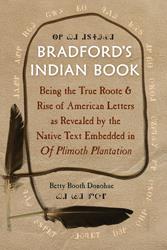 Bradford's Indian Book:
Being the True Roote & Rise of American Letters as Revealed by the Native Text Embedded in Of Plimoth Plantation

"Offers a powerful revisioning of the genesis of American literary history, revealing that from its earliest moments, American literature owes its distinctive shape and texture to the determining influence of indigenous thought and culture."--Joanna Brooks, San Diego State University

"Partly a close, detailed analysis of the specific text and partly a broader analysis of Native identity, literary influences, and spiritual affiliation, the book makes a sophisticated and compelling claim for the way Indian influences permeate this Puritan text."--Hilary E. Wyss, Auburn University

William Bradford, a leader among the Pilgrims, carefully recorded the voyage of the Mayflower and the daily life of Plymouth Colony in a work--part journal, part history--he titled Of Plimoth Plantation. This remarkable document is the authoritative chronicle of the Pilgrims’ experiences as well as a powerful testament to the cultural and literary exchange that existed between the newly arrived Europeans and the Native Americans who were their neighbors and friends.
It is well-documented that Native Americans lived within the confines of Plymouth Colony, and for a time Bradford shared a house with Tisquantum (Squanto), a Patuxet warrior and medicine man. In Bradford’s Indian Book, Betty Booth Donohue traces the physical, intellectual, psychological, emotional, and theological interactions between New England’s Native peoples and the European newcomers as manifested in the literary record.
Donohue identifies American Indian poetics and rhetorical strategies as well as Native intellectual and ceremonial traditions present in the text. She also draws on ethnohistorical scholarship, consultation with tribal intellectuals, and her own experiences to examine the ways Bradford incorporated Native American philosophy and culture into his writing.
Bradford’s Indian Book promises to reshape and re-energize our understanding of standard canonical texts, reframing them within the intellectual and cultural traditions indigenous to the continent. Written partly in the Cherokee syllabary to express pan-Indian concepts that do not translate well to English, Donohue’s invigorating, provocative analysis demonstrates how indigenous oral and thought traditions have influenced American literature from the very beginning down to the present day.


Betty Booth Donohue is an independent scholar and a member of the Cherokee Nation.

Has potential for other scholars who are interested in informal structures and relationships in the Early Modern period.
--Indigenous Peoples Issues and Resources

Intriguing and Highly Informative, and offers new ways through which to reconsider the whole of American letters and literature.
--American Indian Culture and Research Journal

Provides fruitful ways of reassessing a canonical voice from the colonial culture to destabilize mythic narratives of colonial might… [and] expand[s] on current trends in scholarship to challenge representations of native and Anglo-American communities and systems as oppositional.
--Early American Literature

Donohue’s assessment of the two-way cultural exchange initiated in Of Plimoth Plantation is groundbreaking and utterly convincing.
--Studies in American Indian Literatures