"Machaut’s Legacy deepens our appreciation of the poet’s wide-ranging accomplishments and influences, which span from the Middle Ages to the postmodern era. It stakes out exciting new territories and provocative theses, all of which enhance our understanding of this genius of world literature."--Tison Pugh, author of Chaucer's (Anti-)Eroticisms and the Queer Middle Ages

"This richly erudite volume contextualizes Machaut as a seminal medieval poet whose work extends its reach well into the modern era. Machaut's Legacy pulls the reader through almost 700 years of literary history, illustrating the extraordinary influence that this writer had on his contemporaries, as well as his lasting impact on the modern novel."--Lynn T. Ramey, author of Black Legacies: Race and the European Middle Ages

"Truly brilliant. Makes a claim to a paradigm shift in how we envisage the history of literature. Palmer and Kimmelman make an excellent case for Machaut as the major innovator in narrative and that his genre, the dit, heralds modernism or even postmodernism."--William Calin, author of The Lily and the Thistle: The French Tradition and the Older Literature of Scotland

"An ambitious work that seeks, with great acuity, the origin of the kind of ‘novel’ in the dit and not in the romaunt. It examines the development of the judgment poetry format through the study of three texts by Machaut, pondering on this intricate form."--Jacqueline Cerquiglini-Toulet, author of A New History of Medieval French Literature

In a daring rewrite of literary history, contributors to this volume argue that the medieval poet, composer, and musician Guillaume de Machaut was the major influence in narrative craft during the late Middle Ages and long after.   Examining Machaut’s series of debate poems, part of the French tradition of dit amoureux (love tales), contributors highlight the genre’s authorial self-consciousness, polyvocality, and ambiguity of judgment. They contend that Machaut led the way in developing and spreading these radical techniques and that his innovations in form and content were forerunners of the modern novel.

R. Barton Palmer, Calhoun Lemon Professor of Literature and director of film studies at Clemson University, is coeditor of An Anthology of Medieval Love Debate Poetry. Burt Kimmelman, professor of English at the New Jersey Institute of Technology, is the author of The Poetics of Authorship in the Later Middle Ages: The Emergence of the Modern Literary Persona.

Allegory and the Poetic Self: First-Person Narration in Late Medieval Literature
An Anthology of Medieval Love Debate Poetry 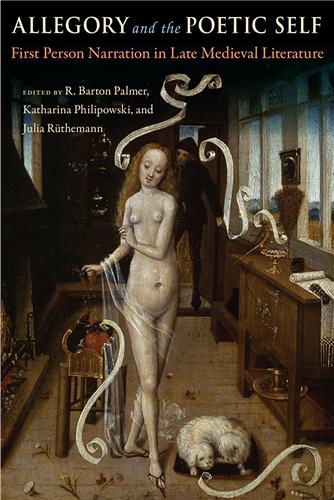