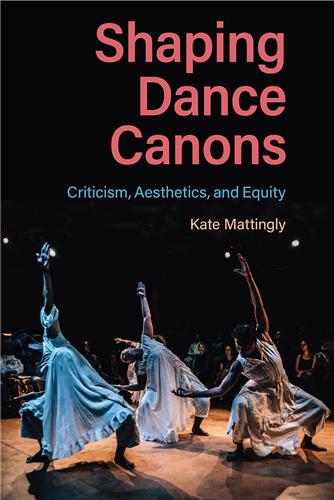 “Assembled with urgent clarity and razor-sharp analytical force, this thoughtful book provokes a consideration of how it is that some writers make sense, or non-sense, of the worlds of dance we share. Mattingly helps the reader understand that dance criticism is bound up in systems of exclusion and disavowal that must be acknowledged. An offering of urgent frameworks for thinking about how arts criticism might function in a progressive, intentionally diverse twenty-first-century landscape.”—Thomas F. DeFrantz, coeditor of Black Performance Theory

“Compellingly argues that a small subset of white dance critics in the twentieth century had outsized power in determining the landscape of dance as an artistic field in the United States. Mattingly also pays careful attention to Black cultural critics who offered a counter-discourse to the white gatekeepers’ narratives. A text that every dance scholar, teacher, and practitioner should have on their shelf as an invaluable resource for understanding how the field came to be and how to chart a better path going forward.”—Joanna Dee Das, author of Katherine Dunham: Dance and the African Diaspora

Dance criticism has long been integral to dance as an art form, serving as documentation and validation of dance performances, yet few studies have taken a close look at the impact of key critics and approaches to criticism over time. The first book to examine dance criticism in the United States across 100 years, from the late 1920s to the early twenty-first century, Shaping Dance Canons argues that critics in the popular press have influenced how dance has been defined and valued, as well as which artists and dance forms have been taken most seriously.

Kate Mattingly likens the effect of dance writing to that of a flashlight, illuminating certain aesthetics at the expense of others. Mattingly shows how criticism can preserve and reproduce criteria for what qualifies as high art through generations of writers and in dance history courses, textbooks, and curricular design. She examines the gatekeeping role of prominent critics such as John Martin and Yvonne Rainer while highlighting the often-overlooked perspectives of writers from minoritized backgrounds and dance traditions. The book also includes an analysis of digital platforms and current dance projects—On the Boards TV, thINKingDANCE, Black Dance Stories, and amara tabor-smith’s House/Full of BlackWomen—that challenge systemic exclusions. In doing so, the book calls for ongoing dialogue and action to make dance criticism more equitable and inclusive.

Kate Mattingly is assistant professor of dance at Old Dominion University. She has written for the New York Times, the Village Voice, Dance Magazine, and Pointe Magazine, and she is an associate editor of Dance Chronicle.