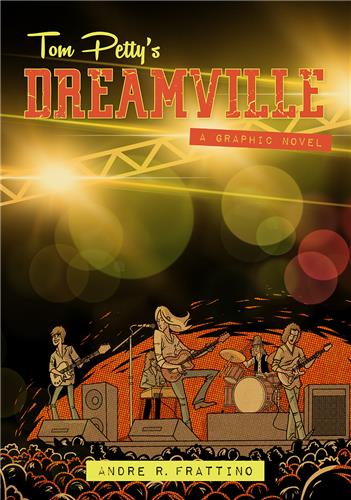 
The story of the making of a rock legend, bringing to life Tom Petty’s formative years in his hometown

“The wild-but-true story of a north Florida boy who grew up to become one of the world’s great songwriters and performers.”—From the foreword by Marty Jourard, author of Music Everywhere: The Rock and Roll Roots of a Southern Town

“Frattino has masterfully created an absorbing account of the earliest years of one of America’s greatest rock musicians. This beautifully illustrated book is filled with the same heart, humor, and charm that made Tom Petty a legend. Frattino runs down Petty’s dreams in impeccable detail in both story and art. A must-read for any rock fan.”—Christopher McKittrick, author of Somewhere You Feel Free: Tom Petty and Los Angeles

“Tom Petty’s Dreamville is a magic carpet ride to a time when Tom Petty was just another kid with an improbable dream. It transports you to Gainesville, before the Heartbreakers or Dylan or the Wilburys, and does, with deft storytelling and evocative illustrations, what so many books fail to do: it puts us in the time and place, when nothing and everything was possible.”—Jeff Slate, musician and journalist

“Frattino takes a searching look at Tom Petty’s life, up close and through the lens of his Florida roots and legacy. Meeting this version of Petty gives us a very human and empathetic look at the evolution of the aspiring musician’s dream, his search for himself as a celebrity in the public eye, and ultimately, the masterful music he created.”—Hannah Means Shannon, comic editor and music journalist

“A fantastic introduction to the story of one of rock’s great icons. Told with the aid of Frattino’s breezy four-color deft and slick cartooning style, this book goes down as easy as any Heartbreaker tune.”—T.J. Kirsch, coauthor of Willie Nelson: A Graphic History

“A delightful read! Tom Petty’s Dreamville has a narrative that is well paced and paired with fun and inviting artwork. This graphic novel offers a timeless experience and is an especially great recommendation for any musical history or rock-and-roll fan.”—Meredith Laxton, artist of MPLS Sound

“An illustrative tour de force, recounting the life story of Florida’s most iconic rocker in a new and engaging way. Through this book, Tom Petty is cast as a rags-to-riches rock-and-roll comic book hero.”—Bob Kealing, author of Good Day Sunshine State: How the Beatles Rocked Florida

This graphic novel of rock superstar Tom Petty recreates the beginnings of Petty’s music career, from his Southern childhood and his first guitar to the early milestones he reached in Los Angeles with the Heartbreakers. Bringing to life Petty’s hometown of Gainesville, Florida, in the 1960s and ’70s with illustrations that capture the era, Andre Frattino focuses on the struggles and successes Petty experienced in his journey to fame.

The story is rich with artists who influenced the young Petty, from Elvis Presley and the Beatles to future Eagles guitarist Don Felder. It follows the creation of Petty’s first bands including the Sundowners, the Epics, and Mudcrutch, whose members Mike Campbell and Benmont Tench went on to become founding members of the Heartbreakers, and it shows Petty navigating friendships and relations with his family while pursuing his goals. Frattino’s artwork draws readers into Petty’s world, portraying places such as Lillian’s Music Store, Lipham Music, the University of Florida, and the many small-town venues where Petty won fans and built a following.

Tom Petty’s Dreamville depicts the talent, vision, and determination of a legend in the making who didn’t back down in the face of obstacles as he reached for rock history. This look into a formative place and time in Petty’s life will delight longtime fans and inspire music hopefuls who may also be running down a dream.

Andre R. Frattino is an award-winning graphic novelist based in Savannah, Georgia. His books include A Land Remembered: A Graphic Novel; Tokyo Rose: Zero Hour; and Simon Says: Nazi Hunter.

Music Everywhere: The Rock and Roll Roots of a Southern Town