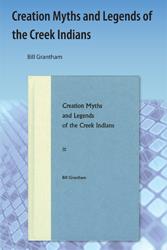 Creation Myths and Legends of the Creek Indians

"A long-needed study of the creation stories and legends of the Creek Indian people and their neighbors...including the influential Yuchi legends and Choctaw myths as well as those of the Hitchiti, Alabama, and Muskogee."--Charles R. McNeil, Msueum of Florida History, Tallahassee

The creation stories, myths, and migration legends of the Creek Indians who once populated southeastern North America are centuries--if not millennia--old. For the first time, an extensive collection of all known versions of these stories has been compiled from the reports of early ethnographers, sociologists, and missionaries, obscure academic journals, travelers’ accounts, and from Creek and Yuchi people living today.

The Creek Confederacy originated as a political alliance of people from multiple cultural backgrounds, and many of the traditions, rituals, beliefs, and myths of the culturally differing social groups became communal property. Bill Grantham explores the unique mythological and religious contributions of each subgroup to the social entity that historically became known as the Creek Indians. Within each topical chapter, the stories are organized by language group following Swanton’s classification of southeastern tribes: Uchean (Yuchi), Hitchiti, Alabama, Muskogee, and Choctaw--a format that allows the reader to compare the myths and legends and to retrieve information from them easily. A final chapter on contemporary Creek myths and legends includes previously unpublished modern versions. A glossary and phonetic guide to the pronunciation of native words and a historical and biographical account of the collectors of the stories and their sources are provided.

Bill Grantham, associate professor of anthropology at Troy State University in Alabama, is anthropological consultant to the Florida Tribe of Eastern Creeks. He has contributed chapters to several books, including The Symbolic Role of Animals in Archaeology.