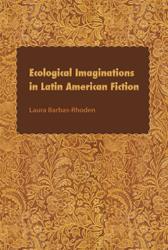 "A welcome and needed contribution to the global dialogues dedicated to the environment. It also highlights the importance authors of fiction play in denouncing abuses and practices within countries in which critiques of government policies can lead to persecution and ostracism."--Mary Ann Gosser Esquilín, Florida Atlantic University

From the rainforests of Costa Rica and the Amazon to the windswept lands of Tierra del Fuego, Laura Barbas-Rhoden discusses the natural settings within contemporary Latin American novels as they depict key moments of environmental change or crisis in the region from the nineteenth-century imperialism to the present.

By integrating the use of futuristic novels, Barbas-Rhoden pushes the ecocriticism discussion beyond the realm of "nature writing." She avoids the clichés of literary nature and reminds readers that today’s urban centers are also part of Latin America and its environmental crisis.

One of the first writers to apply ecocriticism to Latin American fiction, Barbas-Rhoden argues that literature can offer readers a deeper understanding of the natural world and humanity’s place in it. She demonstrates that ecocritical readings of Latin American topics must take into account social, racial, and gender injustices. She also addresses postapocalyptic science fiction that speaks to a fear of environmental collapse and reminds North American readers that the environments of Latin America are rich and diverse, encompassing both rural and urban extremes.

"Analyzes works depicting Argentina at the turn of the nineteenth century, the Amazon in the mid-twentieth century, and Mesoamerica in the future."
--The Chronicle Review

"makes an eloquent case for how ecocriticism can be an illuminating approach for Latin Americanists, and, in particular, how it affords a deeper understanding of topics -- such as modernity, neocolonialism, land claims, utopian projects, race, gender, authoritarianism, and corruption -- that have long been central to Latin American literature"
--Adrian Taylor Kane, ISLE

"Provides an interesting scope for reading efofiction: the critique of the dominant economic rationality in Latin American societies."
--Review: Literature and Arts of the Americas

“An important entry in the catalogue of regionally focused ecocriticism.
--The Americas: A Quarterly Review of Latin American History

It establishes a critical continuity between the exploitation of human and non-human resources. The analysis highlights the bonds between modernization projects, social exclusion, and ecological damage, showing the rhetorical and argumentative strategies that foster a consciousness of the literally vital necessity of understanding the history of economic domination and its simultaneous impact over people and places.
--Latin American Research Review