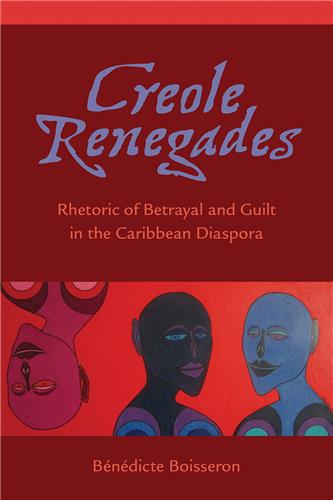 Creole Renegades
Rhetoric of Betrayal and Guilt in the Caribbean Diaspora

“Outstanding. … The depth of its historical knowledge and its sustained critique of near-sacrosanct ideas of the Caribbean make this a timely book.”—The Americas

“Boisseron’s study is a highly original, fascinating analysis of an eclectic group of intellectuals and approaches many issues of fundamental importance for postcolonial and Caribbean studies.”—Research in African Literatures

"Rich in scope and audacious in its critical vision, Creole Renegades incisively advances debates about fundamental aspects of our postcolonial and globalized experiences such as the enigmas of racial passing, creoleness, and returning and leaving 'home.'"—Anny Dominique Curtius, author of Symbiosis of a Memory

"An important book that tackles the phenomenon of exiled Caribbean authors from a new perspective, underscoring their contentious relationship with the home island. Boisseron continues the work of 'decentering' Caribbean studies, moving the locus of analysis from the Antilles or Europe to North America."—Richard Watts, author of Packaging Post/Coloniality

"This insightful approach illuminates important shifts in Caribbean literature and enables Boisseron to make new, essential contributions into the articulation of subjectivities in twenty-first century literary criticism."—Frieda Ekotto, author of Race and Sex across the French Atlantic


These expatriate and second-generation authors refuse to be simple bearers of Caribbean culture, often dramatically distancing themselves from the postcolonial archipelago. Their writing is frequently infused with an enticing sense of cultural, sexual, or racial emancipation, but their deviance is not defiant.


Underscoring the typically ignored contentious relationship between modern diaspora authors and the Caribbean, Boisseron ultimately argues that displacement and creative autonomy are often manifest in guilt and betrayal, central themes that emerge again and again in the work of these writers.

Bénédicte Boisseron is Professor of Afroamerican and African Studies at the University of Michigan, Ann Arbor. She is the coeditor of Voix du monde: Nouvelles francophones.

Boisseron’s study is a highly original, fascinating analysis of an eclectic group of intellectuals and approaches many issues of fundamental importance for postcolonial and Caribbean studies.
--Research in African Literatures