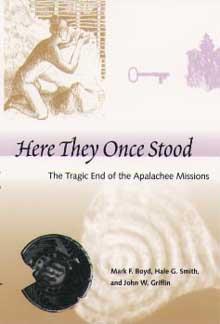 Here They Once Stood
The Tragic End of the Apalachee Missions

"The book throws much new light on the final, critical years of the ‘Mission Era’ of northern Florida. . . . [It] fills in a most interesting and important aspect of this story; namely, the difficult life led by the Franciscans, who established their simple, crude outposts among a most inhospitable people. The whole picture of the missionary’s life--his simple mission buildings and the paucity and crudeness of his material blessings--is brought out by these studies. How different a picture than the one so many of us have of the Spanish missionary following in the wake of conquering armies. . . . An important contribution to the history of the Spanish period in America!"--American Antiquity

"An historical-archaeological case study of two Spanish missions and of the area now comprising Leon and Jefferson counties. The authors reaffirm the fact that missions in the region were destroyed in the early 1700s and that they were not largely revived thereafter; and they properly conclude, it seems, that their documents and excavations furnish information on the missions during their heyday."—Florida Historical Quarterly


In the early 17th century, 150 years before Spanish missions were established in California, a chain of missions reached westward from St. Augustine across northern Florida. Today nothing exists of those Florida Franciscan outposts. Our knowledge of them comes only from archival research and information gleaned from archaeological excavations.
Florida's missions came to a fiery end in the first few years of the 18th century, victims of devastating raids by Carolinian militia and their Indian allies. The Apalachee and other mission Indians were slain, some by being burned at the stake or flayed alive. Others were taken back to Charleston as slaves and still others fled. Here They Once Stood, first published in 1951 and a classic example of collaborative research, presents the first-hand accounts describing the horrific fate of the missions. It also offers archaeological reports further documenting the missions and the lives of the native peoples who lived and died as Christians under Spanish rule.

Mark F. Boyd, a well-known malariologist, was historian for the Florida Park Service and, from 1946 to 1949, president of the Florida Historical Society. Hale G. Smith, also an employee of the Florida Park Service, was chairman of the Department of Anthropology at Florida State University. John W. Griffin, the author of pathbreaking writing on the early years of historical archaeology in the Southeast, was the first professional archaeologist employed in the state of Florida, in 1946. In 1993 he received a posthumous Award of Merit from the Society for Historical Archaeology.