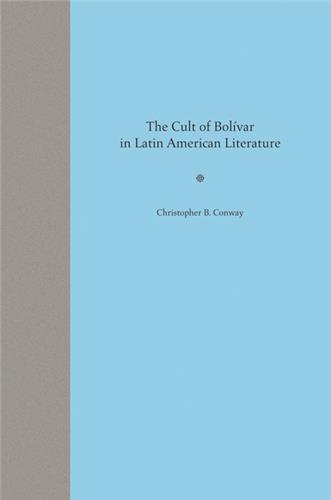 The Cult of Bolívar in Latin American Literature

"A fascinating multidisciplinary cultural analysis of the figure of Bolívar that will be uniquely useful to those attempting to grapple with the influence of this figure on the Latin American imagination. Conway's persuasive and subtle analyses of historical, literary, and visual sources demonstrate how the authoritative image of Bolívar was constructed, appropriated, and contested from the independence period through the present."--Mary Beth Tierney-Tello, Wheaton College

The Cult of Bolívar explores the Latin American cult of Simón Bolívar in modern literature through a broad array of texts that include fiction, children's literature, poetry, journalism, and presidential speeches. The image of Simón Bolívar (1783-1830) has been central to debates about Latin American identity since the 19th century and has been continually readapted to address current problems. This study examines the interplay of myth and disillusionment in modern representations of Bolívar.


After outlining the emergence of the Cult of Bolívar during the Wars of Independence and the early national period, Christopher Conway uses novels to frame in-depth discussions of issues central to Bolivarian nationalism: the deification of the hero, monuments and iconoclasm, fatherhood and sexuality, and the promise and failure of modernity. This interdisciplinary study argues that representations of Bolívar trace the difficult and often contradictory processes by which nationalism imagines its past, present, and future.


In addition to original archival research about the rise of Bolivarian nationalism in the 19th century and literary analyses of key novels such as Gabriel García Márquez's The General in His Labyrinth, Conway includes discussions of contemporary Latin American art and presidential politics. He utilizes gender studies and a broad spectrum of Bolivariana to frame our understanding of different aspects of hero worship. Also covered are controversial representations of Bolívar that resulted in public outcries in Latin America, such as Juan Dávila's hermaphroditic painting of Simón Bolívar and Denzil Romero's pornographic novel about Bolívar's mistress, Manuela Sáenz.

Christopher B. Conway is assistant professor of Hispanic studies at Brown University. He is the editor of Peruvian Traditions by Ricardo Palma (2003) and has published articles on Latin American literature in Hispanic Review, Revista de Crítica Literaria, Latinoamericana, and other international journals.

"Puts forward an interesting take on the question of Latin American identity in which Bolivar plays such a significant role, one which reinforces the inbuilt dichotomy of this military figure."
--British Bulletin of Publications on Lat Amer/Carib/Portugal/Spain