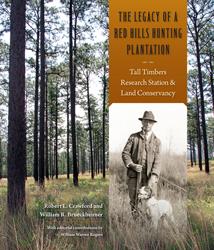 "A fascinating history of the ecological consciousness and developing science of Florida’s Red Hills region."--Sara Warner, author of Down to the Waterline

"No other work captures the range of scientific studies so vigorously pursued over the past century from quail biology to fire ecology to ecosystem management."--Frederick R. Davis, author of The Man Who Saved Sea Turtles

The Red Hills region is an idyllic setting filled with longleaf pines that stretches from Tallahassee, Florida, to Thomasville, Georgia. At its heart lies Tall Timbers, a former hunting plantation.
In 1919, sportsman Henry L. Beadel purchased the Red Hills plantation to be used for quail hunting. As was the tradition, he conducted prescribed burnings after every hunting season in order to clear out the thick brush to make it more appealing to the nesting birds. After the U.S. Forest Service outlawed the practice in the 1920s, condemning it as harmful for the forest and its wildlife, the quail population diminished dramatically.
Astonished by this loss and encouraged by his naturalist friend Herbert L. Stoddard, Beadel set his sights on conserving the land in order to study the effects of prescribed burnings on wildlife. Upon his death in 1958, Beadel donated the entire Tall Timbers estate to be used as an ecological research station.
The Legacy of a Red Hills Hunting Plantation traces Beadel’s evolution from sportsman and naturalist to conservationist. Complemented by a wealth of previously unpublished, rare vintage photographs, it follows the transformation of the plantation into what its founders envisioned--a long-term plot study station, independent of government or academic funding and control.

Robert L. Crawford was formerly a biologist on the Tall Timbers staff and has contributed many articles to The Auk, The Wilson Bulletin, The Oriole and other ornithological journals. William R. Brueckheimer was the author of Leon County Hunting Plantations: An Historical and Architectural Survey. After retiring as chair of the geography department at Florida State University, he was a Tall Timbers Beadel Fellow from 1973 to 1984.

"The engaging narrative, historical photographs, sketches of local birds, and glimpses of the landscapes of old Florida as well as the descriptions of research conducted at Tall Timbers make this a valuable work for a wide audience."
--CHOICE

"Extensively and effectively illustrated with maps, photographs, and other images…the narrative is very readable yet informative."
--Journal of Field Ornithology

"Paint[s] rich portraits of influential researchers and innovators that have passed through and helped form Tall Timbers…the definitive resource on Tell Timbers Research Station and Land Conservancy provide a breadth of cultural and environmental history of the Red Hills region and Tall Timbers."
--Ecology

“Not only describes the important role Tall Timbers has played in conserving our local ecology, it also offers a readable history of North Florida-South Georgia.”
--The Bookshelf (blog)

“An important contribution to the history of fire ecology and land management in the best interests of conservation”
--The Auk: Ornithological Advances