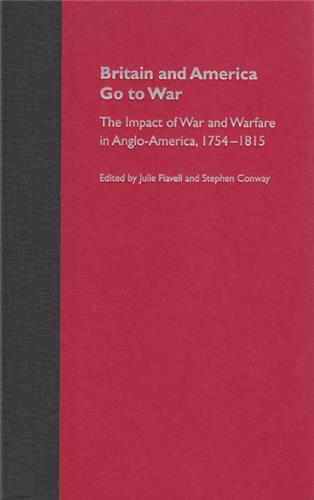 Britain and America Go to War
The Impact of War and Warfare in Anglo-America, 1754-1815

"These essays are exceptionally well-written, carefully argued, and thoroughly grounded in primary sources and secondary literature. The authors--leaders in their profession, well published, and award winners--offer thoughtful analysis and elegant writing."--Daniel Schafer, University of North Florida

Nine leading historians of the new military history offer a fresh look at a critical period in the history of the Atlantic world. They examine the three major North American conflicts that disrupted the British Empire between 1754 and 1815: the Seven Years' War, the American Revolution, and the War of 1812. By framing their analysis within a British perspective, several of these essays restore the British dimension to our understanding of these wars. Taken together, these wars helped to define the identity of each nation while transforming the entire English-speaking world.

The new military history shifts the reader’s attention from troop movements and armaments to the social and cultural nature and impact of warfare. The authors explore questions of gender in the British Army, the experience of the common soldier, identities in the English Atlantic world, and the press and popular perceptions of war. These nuanced readings of warfare open a window onto the military experience of the British and North American people.

Contents
Chronology
Introduction by Julie Flavell and Stephen Conway
Part I. The Seven Years' War
1. War, Empire, and the "National Interest" in Mid-Eighteenth-Century Britain, by Bob Harris
2. Venus and Mars: Women and the British American Army in the Seven Years' War, by Peter Way
3. The Thirteen Colonies in the Seven Years' War: The View from London, by P. J. Marshall
Part II. The American Revolution
4. British Perceptions of New England and the Decision for a Coercive Colonial Policy, 1774-1775, by Julie Flavell
5. Responses of the British Media to the American Campaigns of the Howe Brothers, by Margaret Stead
6. "Like the Irish"? Volunteer Corps and Volunteering in Britain during the American War, by Stephen Conway
Part III. The War of 1812
7. A "Species of milito-nautico-guerilla-plundering warfare": Admiral Alexander Cochrane's Naval Campaign against the United States, 1814-15, by C. J. Bartlett and Gene A. Smith
8. Experiencing the War of 1812, by Michael A. Bellesiles
9. The Making of an Atlantic State System: Britain and the United States, 1795-1825, by Eliga H. Gould

"Essays bristle with up-to-date scholarship . . . A useful resource for the study of British imperialism, Colonial America, or the early years of the US."
--Choice

"They collectively expand our understanding of the ways in which warfare affects the communities it touches far beyond operational details that dominate most studies."
--Journal of Military History

"Important contributions to a discussion of the emerging Atlantic community in the early nineteenth century."
--The Journal of American History

"The editors have done an excellent job. Each essay has merit. Each is thoughtful and edifying, and some blaze new territory. Teachers will find abundant material for lectures and classroom discussion, while scholars will discover stimulating leads for their own research."
--American Historical Review

"With contributions by veterans of Anglo-American historiographical conflict and new recruits alike, the volume provides a welcome overview of new scholarship and the debates circulating through the currents and winds of the Atlantic."
--The Northern Mariner

"A fresh, British-oriented view of these three determinative conflicts. The contributors supply well-written, scholarly, and very well-annotated and documented works."
--The Historian