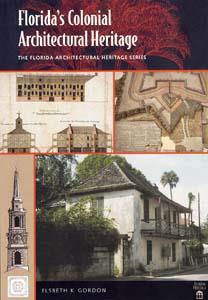 "This first-ever book on Florida's colonial architecture will be an eye-opener to readers who identify American colonial buildings solely with the powdered-wig states of Virginia and New England. Armed with the rich findings of historical and archaeological research, and gifted with an attractive writing style that brings long-forgotten buildings to life, Elsbeth Gordon has greatly enlarged our understanding of Old Florida. May this book find its way onto every Florida bookshelf--and to those in Virginia and New England, as well."--Michael Gannon, University of Florida

"The first well-researched and carefully written history of an important period in Florida architecture, which details the work of the original inhabitants and the Spanish and English settlers."--Donald W. Curl, Florida Atlantic University

Florida's Colonial Architectural Heritage is the story of how buildings were planned and constructed in Florida from 1565 to 1821, the 256 years that the colony was ruled by Spain and England. From indigenous Native American dwellings through Spanish/Indian, Spanish, and British architecture, Gordon traces the styles, materials, uses, and context of almost every building recorded or standing during this period.

Not only does Gordon recount a story never before fully told, she tells it ingeniously, by resurrecting the lives of the colonial designers, their personal histories, and their drawings and building technologies. Gordon shows how local materials, climate, cataclysmic events, and even faith all played a part. Readers will find that Indians had technology to build community structures able to hold 3,000 people, that the Spanish and British both erected impressive buildings embellished in current European fashion, that the plaza and streets of St. Augustine still exist today as they were laid out in 1572 and 1598, and that this oldest surviving European-founded capital in the country had undergone two urban renewals by the time the Pilgrims landed at Plymouth.

In this substantial and detailed account, Gordon draws on archaeological findings and on historical documents and drawings in archives in Spain, Cuba, Mexico, England, and the United States. Her combination of detailed scholarship, crisp writing, and abundant illustrations will reach beyond historians and scholars to embrace the wide circle of those eager to discover that Florida's colonial legacy is far richer than anyone knew.

Elsbeth "Buff" Gordon is a photographer, artist, and art historian.

"At a time when most volumes devoted to a state's architecture are merely a compilation of examples paraded to illustrate a simplistic and often incorrect conception of style or are merely picture books with glib commentary, Florida is lucky to have such an informative and interesting work that is unlikely to do much to advance the general knowledge of a remote, but meaningful, past." - American Studies International
--American Studies International

"an invaluable contribution to the understanding of the development of Colonial American architecture." - H Net
--H-Florida

"an invaluable contribution to the understanding of the development of Colonial American architecture. Florida's relevance to the early colonial experience in North America has been neglected in the historiography of the past. Its multinational character, which may seem contradictory to Plymouth as the premier example of the American experience school, may be a better indicator for the development of the nation after the colonial era." - H Net
--H-Florida

" It is refreshing to encounter a book on a neglected, yet important aspect of colonial architectural developments in the United States - the Spanish in Florida and the region's heritage." ; "I highly recommend the book to readers interested in history, architectural history, preservation, and those who simply want to know more about early Florida. Gordon is brave to pioneer a text on Florida's architectural heritage even though more archaeological work remains to be done in order to uncover more of the state's heritage. Now there is a book that one can use as an adequate reference to the subject."
--VAN: Vernacular Architecture Newsletter

" What makes Gordon's book so appealing is the myriad of photographic examples or drawings used to portray particular building styles, which provide - in some cases - the first published images of a particular structure or complex." ; " The book will not only expand one's knowledge of Florida's colonial architectural styles, but also will show how local materials, climate, cultural norms, and cataclysmic events ( such as storms, fires, and conflict) played a role in building technology."
--St. Augustine Archaeological Association Newsletter