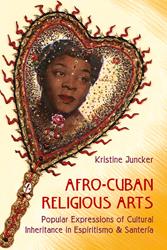 "Challenges the reader in provocative new ways. Points to the salient call to action presented by local Santería and Espiritismo arts, ritual, performance, and other cultural forms in addressing core questions of history, legacy, and new beginnings."--Suzanne Preston Blier, author of Royal Arts of Africa

"A much needed study of the manner in which the religious art of women is a fundamental dimension of Afro-Cuban religious ritual, both in the public and private spheres."--Michelle Gonzalez Maldonado, author of Afro-Cuban Theology


From a plantation in Havana Province in the 1880s to a religious center in Spanish Harlem in the 1960s, this book profiles four generations of women from one Afro-Cuban religious family. The women were connected by their prominent roles as leaders in the religions they practiced and the dramatic ritual artwork they created. Each was a medium in Espiritismo--communicating with dead ancestors for guidance or insight--and also a santera, or priest of Santería, who could engage the oricha pantheon.

Kristine Juncker argues that by creating art for more than one religion these women shatter the popular assumption that Afro-Caribbean religions are exclusive organizations. The portraiture, sculptures, and photographs in Afro-Cuban Religious Arts offer rare and remarkable glimpses into the rituals and iconography of Espiritismo and Santería. Santería altars are closely guarded, limited to initiates, and typically destroyed upon the death of the santera while Espiritismo artifacts are rarely considered valuable enough to pass on. The unique and protean cultural legacy detailed here reveals how ritual art became popular imagery, sparked a wider dialogue about culture inheritance, attracted new practitioners, and enabled Afro-Cuban religious expression to explode internationally.

Kristine Juncker is a postdoctoral fellow in the Institute of Latin American Studies at the School of Advanced Studies, University of London.

Offers new insights into how both Afro-Caribbean and non-Afro-Caribbean Pagans move and use multiple religious strategies in identity construction.
--Pomegranate: The International Journal of Pagan Studies

Challenges conventional notions about what constitutes artifact and archive. . . .[and] shows how our own aesthetic values and judgments about art can potentially eclipse the historical and religious experiences of women.
--Hispanic American Historical Review

(translated) Juncker has successfully followed partially incomplete, partially evanescent trails the span the course of around 120 years, which demonstrate successfully . . . the development of a ritual family.
--Anthropos

This transnational study of altars offers a significant contribution to the study of material culture within the history of art and the history of Afro-Cuban religions.
--Journal of Religion