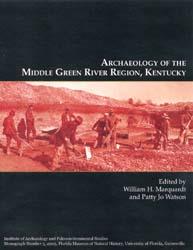 The shell-bearing sites of the middle Green River region in western Kentucky have played a defining role in how archaeologists conceptualize Middle Holocene fisher-hunter-gatherers. This book presents new interpretations of data gathered over a 30-year period about the Native American people who lived along the middle Green River from about 4500 to 2000 B.C.

Interdisciplinary by design, the Shell Mound Archaeological Project directed by William Marquardt and Patty Jo Watson focused first on subsistence, particularly the emergence of indigenous agriculture in eastern North America. As more was learned, the research focus broadened to include not only archaeobotany and zooarchaeology, but also geoarchaeology, pedoarchaeology, archaeomalacology, paleodemography, dental biology, and other specialties. Results of all these investigations are included, as well as comparative studies of stone, bone, and shell artifacts. Accounts of how archaeologists have revised their interpretations of the Green River sites over time provide insight into the history of archaeology in the Mid-South and Midwest. In the final chapter, the co-editors synthesize their findings and suggest research directions for the future.

Richly illustrated with over 240 photos and drawings, this volume will serve as an invaluable reference work for all those interested in eastern United States archaeology.

William H. Marquardt is curator in archaeology at the Florida Museum of Natural History and director of the University of Florida Institute of Archaeology and Paleoenvironmental Studies. Patty Jo Watson is Edward Mallinckrodt Distinguished University Professor Emerita of Anthropology at Washington University in St. Louis.

…a landmark in the evolution of large-scale culture-historical research investigations in the South and Midwest…a magnum opus of summarizing over three decades of multi-disciplinary research on the middle Green River.
--Journal of Field Archaeology

…a detailed and absorbing read of the research trajectories and associated methodologies. …a definitive resource for serious scholars of the Archaic period. …highly recommended.
--Journal of Anthropology Research

" Useful for anyone interested in hunter-gatherer-fisher societies, and particulary those involved in excavation techniques, large scale projects and the integration of specialist results."
--Antiquity

The Calusa and Their Legacy: South Florida People and Their Environments