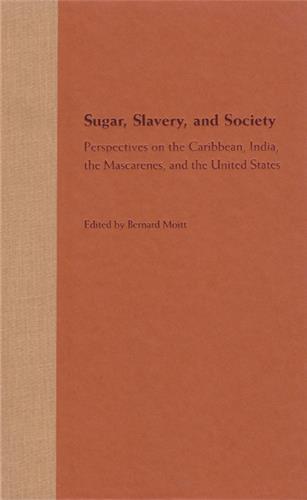 Sugar, Slavery, and Society
Perspectives on the Caribbean, India, the Mascarenes, and the United States

"This collection of essays stands as a reminder that the legacies of sugar and slavery are not confined to the historical past but survive in contemporary societies."--Verene A. Shepherd, University of the West Indies

"Sugar, Slavery, and Society unravels the effects and consequences of the planting of sugarcane and spread of the sugar industry from India to the Caribbean. It is a good example of how a study can take an interdisciplinary approach to the analysis of an important theme that has had an economic, political, sociological, literary, and historical impact on a region."--Selwyn H. H. Carrington, Howard University

This interdisciplinary exploration of the effects and consequences of the cultivation of sugarcane and spread of the sugar industry in societies that relied on free, enslaved, and indentured labor compares the plantation systems used in the Caribbean and the southern United States with the small independent growers and cooperative units of India and the Mascarenes. In the literary works analyzed, the theme of resistance to the vagaries of the sugar plantation system that sought to dehumanize the workers stands out-resistance both by the enslaved and the indentured, by male and female. With regard to the enduring legacies of the sugar plantation system, this study highlights class formation and domination, the practice of racism, and economic growth punctuated by perpetual crisis.

Contents
Introduction, by Bernard Moitt
1. Indian Sugar Then and Now: Power to the Peasants, by B. S. Baviskar
2. Cane and Its Uses in Grainger's The Sugar Cane, Selvon's "Cane is Bitter," Ernest Moutoussamy's Aurore, and Lucie Julia's Les Gens de Bonne-Espérence, by Sada Niang
3. Sugar, Slavery, and Marronnage in the French Caribbean: The Seventeenth to the Nineteenth Centuries, by Bernard Moitt
4. Awakening, Resistance, and Empowerment: The Slave Protagonist in the Cane Literatures of the Caribbean and the Mascarenes, by Joyce Leung
5. Social Stratification and Agency in a Sugar Plantation Society: Enslaved Africans, Free Blacks, and the White Planter Class in the Guiana Colonies and British Guiana, 1700-1850, by Bernard Moitt and Horace L. Henriques
6. Sugar and the Politics of Slavery in Mid-Nineteenth-Century Cuba, by Anton L. Allahar
7. From Slavery to Freedom in Louisiana's Sugar Country: Changing Labor Systems and Workers' Power, 1861-1913, by Richard Follett and Rick Halpern
8. The Caribbean Plantation: Its Contemporary Significance, by Paget Henry

"It offers tremendous insight into the brutal realities of life on the sugar plantation, in addition to illuminating the impressive achievements of the courageous men and women who resisted the plantation system."
--FlaVour