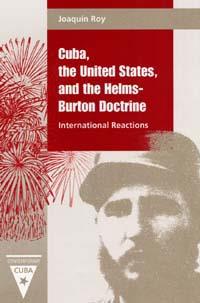 Cuba, the United States, and the Helms-Burton Doctrine:
International Reactions

"An excellent analysis of the Helms-Burton law and its consequences for the United States and for U.S. relations with some of its closest friends and trading partners. As Professor Roy makes clear, Helms-Burton is one of the most counterproductive pieces of legislation ever produced by the U.S. Congress."--Wayne S. Smith, Johns Hopkins University


Offering the first full-length analysis of the Helms-Burton law, Joaquín Roy presents an incisive critical review of the background, evolution, and international consequences of this controversial legislation, enacted in 1996. He argues that the law, the dominant pillar supporting American policy in Cuba, is a codification of four decades of a U.S. embargo aimed at discouraging foreign investment and hastening the collapse of the Castro regime.
Interpreted in some quarters as a continuation of the Monroe Doctrine, the law has become the center of controversy and criticism emanating not only from the Cuban government but from much of the rest of the world on the grounds that it is a violation of international law.
Roy opens with events that have had a critical impact on the overall state of U.S.-Cuban relations, among them the tragic downing of two planes carrying Cuban exiles a few miles from Havana in February 1996, an act that seemed to shatter the possibility of any kind of rapprochement. President Clinton signed Helms-Burton into law less than three weeks later. Roy summarizes the reactions of the international community, where some observers have labeled the law "blackmail," "armed robbery," "diplomatic ambush," and worse. The book ends with commentary on recent developments, including the 1999 visit of Pope John Paul II to Cuba and the worsening of repressive political measures there.
Roy examines each provision in the law in illuminating detail. Instead of causing the collapse of the Cuban government, the law has encountered worldwide opposition and has provided Castro with a political excuse to justify his regime's economic shortcomings.
Joaquín Roy is professor of international studies and director of the European Studies/Iberian Studies Research Institute at the University of Miami. He is the author of many books, including The Ibero-American Space and Cuba and Spain: Relations and Perceptions.

"Roy is at his most incisive when setting out the legal case against the many unprecedented aspects of the Helms-Burton bill, striking just the right balance between complex legal argumentation ad accessibility for the general reader. An excellent primer for those who need to come to grips with this disturbing and ill conceived piece of legislation. " - International Affairs
--International Affairs