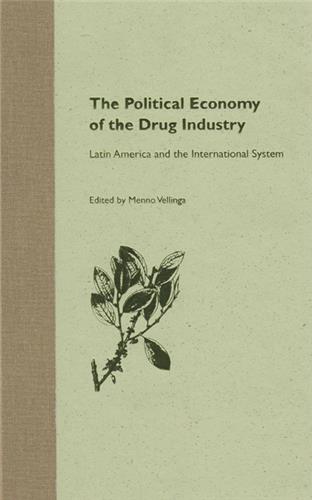 "This comprehensive volume makes a substantive and unique contribution to understanding the drug trade at the national, regional, and global levels. Bringing together respected scholars and analysts from diverse disciplines and from Latin America, Europe, and the United States, it is the most important single volume in the field this decade."--Michael Gold-Biss, American University

Stemming from an international conference held in Utrecht, this collection encompasses the political, economic, social, and legal aspects of the illegal drug industry. The introduction provides an overview of the political economy of the drug industry followed by discussions of the impact of the drug industry on the Latin American source countries; drug trafficking and money laundering; the war on drugs, transnational crime, and international security; and current options for intervention and control.

Contents
Part I. Introduction
1. The Political Economy of the Drug Industry: Its Structure and Functioning, by Menno Vellinga
Part II. The Drug Industry: Its Impact on Economy, Politics, and Society and the Drug Control Effort in Source Countries
2. Has Bolivia Won the War? Lessons from Plan Dignidad, by Eduardo A. Gamarra
3. Questionable Alliances in the War on Drugs: Peru and the United States, by Mariano Valderrama and Hugo Cabieses
4. Illegal Drugs in Colombia: From Illegal Economic Boom to Social Crisis, by Francisco E. Thoumi
5. Mexico: Drugs and Politics, by Luis Astorga
6. The Political Economy of Drugs in the Caribbean: Problems without Passports, by Ivelaw L. Griffith
Part III. Trafficking and Money Laundering
7. The Political Economy of Drug Smuggling, by Peter Reuter
8. Post-Fordist Cocaine: Labor and Business Relations among Colombian Dealers, by Damián Zaitch
9. Follow the Money: Anti-Money-Laundering Policies and Financial Investigations, by Ernesto Savona
Part IV. The Drug Industry and the War on Drugs
10. Perversely Harmful Effects of Counter-Narcotics Policy in the Andes, by Rensselaer Lee
11. Diverging Trends in Global Drug Policy, by Martin Jelsma
12. Multilateral Drug Control, by Sandeep Chawla
13. The European Union and Drug Control: Issues and Trends, by Tim Boekhout van Solinge
Part V. Drugs, Transnational Crime, and International Security
14. Globalization and Transnational Organized Crime: The Russian Mafia in Latin America and the Caribbean, by Bruce Michael Bagley
15. The War against Drugs and the Interests of Governments, by Alain Labrousse
16. Drugs and Transnational Organized Crime: Conceptualization and Solutions, by Ybo Buruma
Part VI. Conclusion
17. The Drug Industry, Its Economic, Social, and Political Effects, and the Options of Intervention and Control, by Menno Vellinga

Menno Vellinga has served as professor of development geography and director of the Institute of Development Studies at Utrecht University, the Netherlands. He presently occupies the Bacardi Chair for Eminent Visiting Scholars at the Center for Latin American Studies at the University of Florida.

"This volume makes a substantive and unique contribution to understanding the drug trade at the national, regional, and global levels."
--LASA Forum