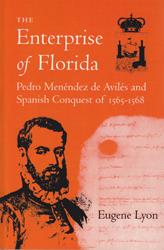 
“Lyon has constructed a running account of the financial juggling act, promotional boosterism, political maneuvering, and seemingly eternal optimism of the adelantado. Lyon is able to see the man whole as smuggler, entrepreneur, overbearing egoist, and religious devotee.”—The Historian

“Menéndez emerges more deeply human than any previous biographer would have us believe.”—The Americas

“[The Enterprise of Florida] explains both the strength and the weakness of sixteenth-century Spanish imperialism [and] effectively displays the depth of understanding of early Spanish colonialism that may now be achieved.”—The Alabama Review

“By far the clearest picture yet drawn of the founding of Florida.”—El Escribano

Adelantado: A Spanish or Spanish colonial official, appointed to represent the King’s interest in frontier areas in return for grants of authority and certain revenues and exemptions. —from the glossary of The Enterprise of Florida

This biography of Pedro Menéndez de Avilés, described as “magisterial” by Florida Historical Quarterly, explicates the role of private conquerors in Spanish expansion. Using primary materials in Spanish and Florida archives, many studied for the first time, Eugene Lyon refutes the claim that the Spanish contract to settle Florida was signed with Menéndez in response to news of the French foothold at Fort Caroline. Not merely an expedition of military dominance or even of religious zeal, the Florida enterprise was primarily a joint commercial venture between Menéndez and the Crown, with the adelantado assuming most of the risks. Menéndez negotiated contracts for opening trade and agricultural centers, and he exploited family ties, particularly with his Asturian kinship group, who supported the adventure with men, ships, and money.

Eugene Lyon retired in 1998 from Flagler College, St. Augustine, Florida, where he had been executive director of the Center for Historic Research. He has written many scholarly and popular works, including the book The Search for the “Atocha” and articles for National Geographic.