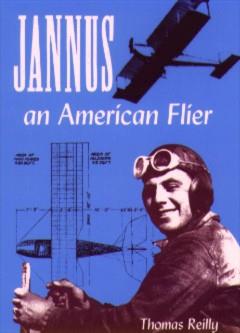 "Jannus, an American Flier recounts the life and exploits of one of the forgotten figures of early aviation, a colleague of Curtiss and Benoist who pioneered in military and commercial aviation but died early and was all but lost amid the high-speed developments of the industry. Reilly’s account will appeal to aviation historians in particular and to the many general readers interested in the pioneer era of flight."--Louis S. Casey, curator, National Air and Space Museum, Smithsonian Institution

Thomas Reilly presents the first complete account of one of America's aviation pioneers. Tony Jannus was a barnstormer, a test pilot, and a youthful, magnetic personality in aviation’s early days of daredevils and adventurers. Reilly follows Jannus’s exploits from his early flights at College Park, Maryland, in 1910, through the first tests of airborne machine guns and parachutes, his record-setting flight from Omaha to New Orleans, to his role in the world's first airline, his career as a test pilot, and his premature death in Russia's Black Sea while delivering bombers to the Romanov government. Figuring prominently in the story are Jannus’s relationships with fellow pioneers of the aviation industry such as Glenn Curtiss, Thomas Benoist, and Katherine Stinson.
Beyond the headlines and records, Reilly introduces us to Jannus the man. Though others might have owned or designed the planes, Jannus was always the center of attention. His personality, good looks, and talent as a speaker made him a popular figure. He dated movie actresses, and women idolized him, though his gifts as the epitome of the romantic flyer led to a bitter break with Tom Benoist and eventually to his "banishment" to Russia by Glenn Curtiss.
Drawing on decades of articles and books about the early aviators as well as FBI files, court cases against the Curtiss Company, hundreds of letters between Jannus and his contemporaries, and materials in the Russian archives, Reilly has composed a fascinating portrait of a compelling, romantic figure from the dawn of American aviation.

Thomas Reilly is an aviation consultant with 25 years of experience as chief financial officer for several airlines. He has served as curator for a number of exhibitions on aviation--most notably the Tuskegee Airmen--and has written many articles on aviation for Air Line Pilot, Atlantic Flyer, and the Journal of the American Aviation Historical Society.

"Jannus deserves attention for his role as one of the leading fliers of the early 20th century, as a pilot in helping to launch the first scheduled airline operation in the US, and for his work as an early figure in the international aviation community. . . . Reilly . . . has done an admirable job of combing through dozens of old newspapers and periodicals in order to reconstruct Jannus's flying experiences and to gain some insight into his personality." -- Choice
--Choice

"This is a fascinating window into another era that helped to set the stage for what was to come." -- Airways
--Airways

"[A] first-rate account of the life and career of this pioneer airman. . . . The author fills his account with a wealth of fascinating detail that not only breathes life into his subject but also illuminates the experience of all first-generation American aviators. . . . Readers with an interest in the earliest days of aviation owe the author a considerable debt for an important book that is a delight to read." -- Journal of Southern History
--Journal of Southern History