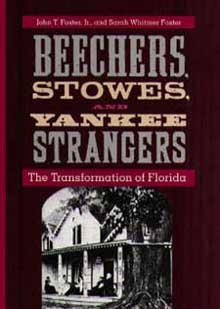 Beechers, Stowes, and Yankee Strangers:
The Transformation of Florida

"A beautifully written, researched, and convincing treatment of an important time and fascinating personalities in Florida’s history."–Mark I. Greenberg, Museum of the Southern Jewish Experience, Jackson, Mississippi

Modern Florida--a world of tourists, retirees from the North, and novel agricultural crops--began among a group of Yankee reformers at the end of the Civil War, including Harriet Beecher Stowe, author of Uncle Tom’s Cabin, and her brother, Charles, who lived in Florida between 1867 and 1885. This book tells the story of the group--and their designs for a postwar Florida--with the action, atmosphere, and insight of a good novel.
Arriving in Florida nearly two decades ahead of Henry Flagler, the Beechers found a wild and inaccessible state with small remnants of a slave economy. As part of the work of Reconstruction, they dreamed of making the state a haven for freedmen and progressive northerners unhampered by the rest of the South’s racial divisions. Settling near Tallahassee and Jacksonville, they worked with Florida’s First Lady, Chloe Merrick Reed, to better education, religion, economics, social and racial relationships, and politics, and they were instrumental in the transformation of Jacksonville from a small seaport to a vibrant city.

Despite continuing interest in Harriet Beecher Stowe, her years in Florida have remained obscure; even less is known about Charles Beecher during this period. Using fresh materials that have never been recorded by the Stowe Center (a major repository of Stowe’s works), John and Sarah Foster fill an important gap in the lives of these celebrated reformers and shed new light on Florida’s history during Reconstruction and the Gilded Age.

John T. Foster, Jr., professor of anthropology at Florida A&M University in Tallahassee, has published widely in the social sciences and history. Sarah Whitmer Foster, professor of sociology and anthropology at Florida A&M University, has published in the areas of comparative studies, the social sciences, and history. Together, they have represented a major relief and development organization in Africa.

"A compelling account of Florida during the Reconstruction era, when Yankee reformers attempted to remake the state to their liking." -- Tampa Tribune
--Tampa Tribune

"Much has been written about carpetbaggers, the rise of Jim Crow laws and the Ku Klux Klan. Here's another side of the period: the reformers, educators, ministers and entrepeneurs who came to Florida and laid a foundation upon which a modern state was built. . . . Beechers, Stowes, and Yankee Strangers is an interesting story about remarkable people during a period of change. The Fosters do a fine job in bringing the individuals and the time in which they lived to life." -- Florida Wildlife
--Florida Wildlife

"For those who think Henry Flagler's railroad was the only thing that brought settlers to Florida, Beechers, Stowes and Yankee Strangers sheds new light on the history of the Sunshine State.

Before Flagler Drove his first spike in Florida, a group of social reformers from the North had a major impact on the state in the Reconstruction period of the late 19th century. . . . The most well-know 'Stranger' was Harriet Beecher Stowe, the author of Uncle Tom's Cabin. Abraham Lincoln is said to have introduced her once as the 'lady who started the Civil War.' Reading this book, one might also call her the 'lady who started Florida tourism.'" -- Daytona Beach News-Journal
--Daytona Beach News-Journal

"Scholars of the Reconstruction, literary historians, and Florida residents. . . will glean startlingly useful information regarding this most unusual of southern states and the equally unusual people who deigned to accept the risks and rigors of a less-than-conventional 'frontier' experience." -- ForeWord
--ForeWord

"A very readable history of Florida covering the period just prior to the Civil War and until the start of the 20th century. . . . If you are interested in seeing how Florida's past shaped its present, this book is a useful tool. It should be required reading for any Florida history class." -- Ft. Pierce Tribune
--Ft. Pierce Tribune

"This book has much to offer. There are good descriptions of life in Reconstruction Florida, especially Jacksonville, and important insights onto the turbulent politics of that era. The Fosters highlight the role of women as reformers during and after the Civil War. Most importantly, the authors give new insights into Florida's tourist beginnings. After reading this work, it becomes obvious that Henry Flagler can no longer stand alone as the father of modern Florida." -- Southern Historian
--Southern Historian

"a valuable book… Beechers, Stowes and Yankee Strangers has much to add to the debate over the patterns of Reconstruction in the South… this book asks big questions about broad topics by using a local approach." - H-Net
--H-Florida

"This is a valuable book, as it examines hitherto unexplored areas of Florida's history . . . . John and Sarah Foster have written a book that will provide a springboard for much research into politics, gender, and religion in Florida in the tumultuous postbellum period."
--H-NET Reviews