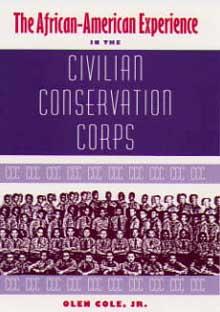 The African-American Experience in the Civilian Conservation Corps

"Emphasizes the unique participation of African Americans in the CCC and their efforts to negate racism. . . . Extremely useful."--Charles Johnson, Jr., Morgan State University

Between 1933 and 1942, nearly 200,000 young African Americans participated in the Civilian Conservation Corps (CCC), one of Roosevelt’s most successful New Deal agencies. In an effort to correct the lack of historical attention paid to the African-American contribution to the CCC, Olen Cole, Jr., examines their participation in the corps as well as its impact on them.
Though federal legislation establishing the CCC held that no bias of "race, color, or creed" was to be tolerated, Cole demonstrates that the very presence of African Americans in the CCC, as well as the placement of the segregated CCC work camps in predominantly white California communities, became significant sources of controversy. Cole assesses community resistance to all black camps, as well as the conditions of the state park camps, national forest camps, and national park camps where African-American work companies in California were stationed. He also evaluates the educational and recreational experiences of African-American CCC participants, their efforts to combat racism, and their contributions to the protection and maintenance of California’s national forest and parts.
Perhaps most important, Cole’s use of oral histories gives voice to individual experiences: former Corps members discuss the benefits of employment, vocational training, and character development as well as their experiences of community reaction to all-black CCC camps. An important and much neglected chapter in American history, Cole’s study should interest students of New Deal politics, state and national park history, and the African-American experience in the 20th century.
Olen Cole, Jr., is associate professor of history at North Carolina Agricultural and Technical State University in Greensboro, North Carolina.

"A long overdue addition to New Deal/African American historiography. . . , offering readers an insightful history of the African American experience in one of the New Deal's most successful agencies."-- Choice
--Choice