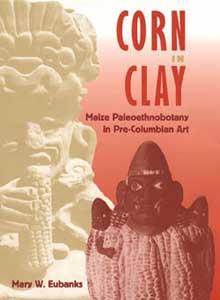 "This landmark work will be of great value to anyone interested in corn and its role in American prehistory."--Anna Roosevelt, Field Museum, Chicago

Combining botany, archaeology, and art history, Corn in Clay provides a novel approach to the study of contact between ancient American cultures. Mary Eubanks integrates evidence from replicas of maize on ancient pottery vessels--from the Oaxaca region of Mexico and the northern coast of Peru--with other biological, archaeological, and geographic evidence to establish a considerable degree of contact between Mesoamerica and the Andean region in precolumbian times.
Focusing on the Zapotec of Mexico and the Moche of Peru, Eubanks begins by telling how she gathered the physical evidence for her study using positive casts from molds made from actual maize ears. The clay replicas depicted on pottery vessels created by ancient artists of these two cultures are precise facsimiles of the botanical specimens. By comparing measurements from the prehistoric models to living races of maize present in Latin American today, Eubanks identified the particular types of maize represented--with compelling results.
Eubanks argues that the presence of South American maize on Zapotec urns and of Mexican maize on Moche jars proves that contact existed between these two geographically distant cultures during the Mesoamerican Classic period (ca. A.D. 400-750). Furthermore, she says, the wide variety of races of maize identified on the Peruvian pottery indicates that the northern coast of Peru was a major center of commercial and cultural exchange that extended from Chile throughout northern South America into Central America and Mexico.
The interdisciplinary nature of this study will make it valuable to botanists, geneticists, and agronomists, as well as archaeologists and anthropologists.

Mary Eubanks, senior research scientist at Duke University, was the first to reproduce successfully an extinct strain of maize for cultivation. She has contributed articles on the origin, evolution, and cultural impact of the cultivation of corn to American Antiquity, Economic Botany, and Theoretical and Applied Genetics.