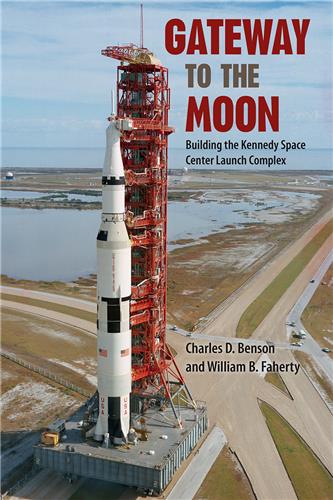 
"The one thing for which this century will be remembered 500 years from now was: This was the century when we began the exploration of space."—Arthur M. Schlesinger

Praise for Moonport: A History of Apollo Launch Facilities and Operations:

“A thorough account of the complex scientific, engineering, and managerial efforts that undergirded the astounding events that the National Aeronautics and Space Administration carried out.”—Journal of American History

“Another simply superb NASA official history. . . . Construction, administration, and technology are carefully interwoven in an unusually candid and frank treatment of the history of America’s first lunar launching facility.”—Aerospace Historian

Gateway to the Moon presents the definitive history of the origins, design, and construction of the lunar launch facilities at Kennedy Space Center, the terrestrial site of one of the greatest achievements of humankind: the first trip to the moon. It includes archival illustrations and diagrams of locations, personnel, and equipment, from aerial views of sandy, undeveloped Cape Canaveral to some of the first photos of the mobile launchers and crawler-transporters.

Filled with the sense of wonder and pride that the earliest U.S. space achievements inspired, the book focuses on some of the most impressive buildings ever constructed, including launch complexes 39A and 39B, the gigantic assemblies from which the Apollo-Saturn vehicles departed for trips into space; the massive eight-acre Vertical Assembly Building (renamed the Vehicle Assembly Building); and the attached Launch Control Center. It also analyzes the technological and governmental interactions necessary to ensure success of the launches.

Originally part of Moonport, one of the volumes of the NASA History Series, this volume is based on extensive interviews with participants in the space program and wide access to official documents, letters, and memoranda. The authors air criticisms directed at the Kennedy Space Center team and address mistakes in launch operations and conflicts within the program. Gateway to the Moon offers a faithful account of technology in service to humanity.

Charles D. Benson, a retired colonel of the U.S. Army, is the coauthor of Living and Working in Space: The NASA History of Skylab.
William B. Faherty (1914–2011) was director of the Museum of the Western Jesuit Missions in Hazelwood, Missouri, retired professor of history at St. Louis University, and archivist emeritus of the Midwest Jesuit Archives. He was the author of more than 50 books.

"The 'definitive' history of the origins, design and construction of the lunar launch facilities at Kennedy Space Center" - Space Policy
--Space Policy

Moon Launch!: A History of the Saturn-Apollo Launch Operations

Florida's Space Coast: The Impact of NASA on the Sunshine State
Moon Launch!: A History of the Saturn-Apollo Launch Operations