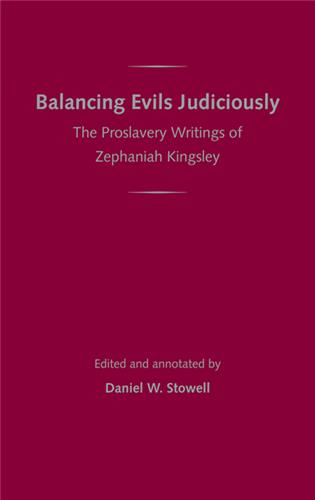 "Kingsley’s place in southern history and America’s endless debate over race, to say nothing of his astonishing life, is only now beginning to be appreciated and explored. . . . Dr. Stowell’s opening essay constitutes a splendid biographical and analytical introduction to the man and his work, and his editorial work in presenting these fascinating documents places professional historians and the general public deep in his debt."--From the foreword by Eugene D. Genovese


For the first time, all the proslavery--but also pro-black--writings of Zephaniah Kingsley (1765-1843) appear together in one volume. Kingsley was a slave trader and the owner of a large plantation near Jacksonville in what was then Spanish East Florida. He married one of his slaves and had children with several others.
While Kingsley eventually emancipated all of his children and their mothers, he became alarmed at the deteriorating status of free blacks after Florida became a territory in 1821. His unusual protest of their treatment, "A Treatise on the Patriarchal System of Society," called for a three-caste society that separated race and class. He envisioned a buffer caste of free people of color between whites and enslaved blacks, but united with whites by economic interests. The treatise simultaneously upheld the legitimacy and necessity of slavery yet assaulted the white southern premise of abject black inferiority.
Daniel Stowell carefully assembles all of Kingsley's writings on race and slavery to illuminate the evolution of his thought. The intriguing hybrid text of the four editions of the treatise clearly identifies both subtle and substantial differences among the editions. Other extensively annotated documents show how Kingsley's interracial family and his experiences in various slaveholding societies in the Caribbean and South America influenced his thinking on race, class, and slavery.
In despair of ever changing the slaveholding patterns of Florida, Kingsley finally settled his mixed-race children and several of his slaves in Haiti; however, he left behind more than 80 of his slaves to work his plantations in Florida. When he died, these African Americans remained in bondage, unfortunate victims of hardening American racial attitudes and of Kingsley's effort to "balance evils judiciously."

Daniel W. Stowell is director and editor of the Lincoln Legal Papers, a project of the Illinois Historic Preservation Agency in Springfield, and author of Rebuilding Zion: The Religious Reconstruction of the South, 1863-1877 (1998).

"Scholars are indebted to Daniel Stowell's excellent edition of all of Kingsley's known writings on slavery, which adds a fascinating voice to the slavery debate among southerners as well as between southerners and northerners." -H-Net Book Review
--H-Net Reviews

"Stowell provides an excellent introduction and detailed footnotes that situate Kingsley in antebellum proslavery debates and describe his unique personal history. Stowell presents a fascinating collection of Kingsley's writings about slavery. Demonstrates the need to include Florida in studies of American slavery. Kingsley's writings make it clear that Florida, especially during the transition from Spanish to American rule, was a borderland where different conceptions of slavery and society collided." Journal of the Early Republic
--Journal of the Early Republic