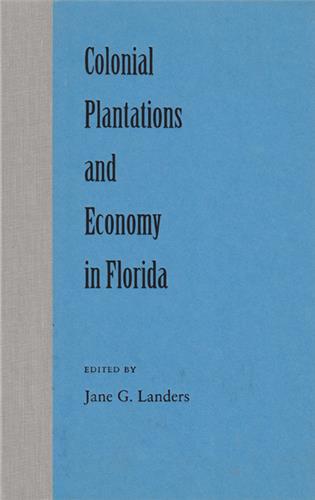 Colonial Plantations and Economy in Florida

"Life in Florida 200 years before the Epcot Center was a complex and painful story of speculation and exploitation, of high hopes and bitter realities. This very southern story has remained unknown to most Americans for too long. Now a diligent group of Florida historians is mining late 18th-century sources to uncover a forgotten world of English and Spanish, Minorcans and Greeks, Ibos and Fulani, Creeks and Seminoles. This timely volume brings together some of their best and most recent work, offering a varied, coherent, and detailed introduction to the work-in-progress that is early Florida history during the crucial period long after De León and De Soto and shortly before Jackson and Osceola."--Peter H. Wood, Duke University

This illustrated collection documents the rich history of Florida’s earliest indigo, rice, and cotton plantations, cattle ranches, timbering operations, and Atlantic commercial networks. Based on primary research in archives in England, Scotland, Spain, Cuba, Minorca, and Florida as well as upon archaeological investigations, the essays trace for the first time the relationship of Florida to both the Caribbean and the Atlantic economies and document Florida’s national and international significance in the colonial period.


Jane G. Landers, associate professor of history at Vanderbilt University, is author of Black Society in Spanish Florida, editor of Free Blacks in the Slave Societies of the Americas, and coeditor of The African American Heritage of Florida (UPF, 1995).

"Despite the book's inadequacies, the essays it contains deserve careful attention. They raise important questions about the performances of Florida's colonial economy, and make it clear that the issue of how it performed is far from settled." - EH.NET
--EH.Net

The African American Heritage of Florida