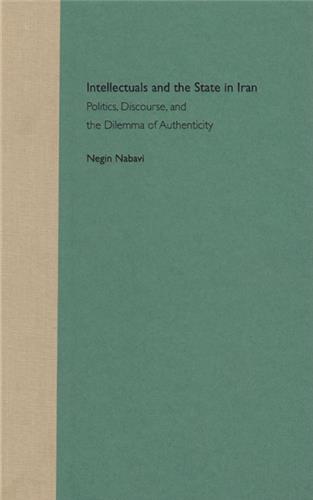 Intellectuals and the State in Iran
Politics, Discourse, and the Dilemma of Authenticity

"Impressive [and] cogently argued. . . . shows how and why Iran's secular
intellectuals gradually changed their generally negative perception of Islam in the
three decades prior to the Islamic Revolution of 1979. With convincing evidence,
[Nabavi] shows that Islam and mysticism had gained growing popularity among
the secular intellectuals in the years preceding the revolution. . . . A must read for
anyone interested in the intellectual history of pre-revolutionary Iran."—Mohsen
Milani, University of South Florida, author of The Making of Iran’s Islamic
Revolution: From Monarchy to Islamic Republic

In the aftermath of the Iranian Revolution of 1979, secularist intellectuals became a much-forgotten group. As the new revolutionary elite consolidated, secularists were marginalized, stigmatized, and accused of being "Westoxicated" and of "propagating Western values." And yet, Nabavi shows for the first time, the secularists played an important role in enabling the revolution to take the shape that it did in 1978-79. The revolution that brought Ayatollah Khomeini into power was as much the revolution of the secularists as it was of Islamist forces.

Drawing on Iranian intellectual periodicals and journals and focusing on a wide range of liberal, left-leaning writers and essayists--many of whom have never been translated, let alone written about--Nabavi re-creates the changing mood within secular intellectual circles in the decades that preceded the revolution. She provides an account of the intellectuals' trajectory from the old days of their membership in the Communist Tudeh Party in the early 1940s, when there was a party line, to the days when they became confused and constrained about what they could do and say. She discusses their changing perception of what it was to be an intellectual together with their shifting view of religion and Islam in particular, which came to find increasing expression among secular circles in the 1970s, as one of the most forceful components of the idea of "authentic culture."

Intellectuals and the State in Iran will appeal to historians and political scientists with an interest in the cultural and intellectual aspects of social change and the question of the synthesis of religion and politics.

Negin Nabavi is assistant professor in Near Eastern Studies at Princeton University.

"Navabi's book sheds clear light on the ideational transformation of an important group of creators of meaning in, and thus makes a valuable contribution to the discourse of intellectual history of, modern Iran."
--Middle East Journal

"Provides fresh insight into the intellectual life in periods before and during the Islamic revolution in Iran. Students of modern Iranian history, politics and culture(s) will find this work an invaluable source of knowledge and information."
--The American Journal of Islamic Social Sciences