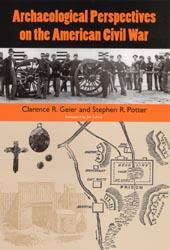 "An impressive compendium of varying but related methods of understanding the war through historical archaeology. Readers willing to expend some effort will come away with a better understanding of the Civil War."--Civil War Book Review

"Geier and Potter deliver a great book that includes archaeological fieldwork, site type diversity, and theoretical perspectives, which provide something for every reader. The authors' contributions vividly convey the battles and effects on the civilian population from participant soldier, prisoner, caregiver, commercial, and civilian perspectives. Connections between contemporary life and Civil War events are made easily here. These connections and extensive use of primary historical sources make the book an excellent undergraduate and graduate text."--Southeastern Archaeology

From the introduction:
"Archaeological Perspectives on the American Civil War is must reading for professionals, collectors, and all people interested in battlefield archaeology, the material culture of the Civil War era, and the preservation of associated sites. Because of the popularity of Civil War literature and archaeology, this well-illustrated and well-written publication will appeal to the general public, as well as to the professional community."--Edwin C. Bearss, historian emeritus, National Park Service

"Speaks to the carnage of war, figuratively and literally, as each author [investigates] the physical evidence of the war and its ramifications to those living at the time and in our culture today. There is little question that the American Civil War changed the fabric of our culture in ways that are still being felt today, and this volume provides a real and tangible link, via the material culture left behind by its participants, to that time."--Douglas D. Scott, Midwest Archaeology Center, Lincoln, Nebraska

From studies of Antietam Battlefield, site of the bloodiest day in American military history, to Andersonville, the infamous Confederate prison, these graphically illustrated essays broaden our understanding of the American Civil War. They demonstrate how historical archaeology, combined with the traditional techniques of the study of history, generates new insights into battlefield tactics, social and military history, and the effects of the war on civilians and communities. The paperback edition includes a new foreword by award-winning journalist Jim Lehrer.


Contents
Introduction, by Edwin C. Bearss
"To Peel This Land," by Clarence R. Geier and Stephen R. Potter
Part I. Tactics and the Conduct of Battle
1. "No Maneuvering and Very Little Tactics": Archaeology and the Battle of Brawner Farm, by Stephen R. Potter, Robert C. Sonderman, Marian C. Creveling, and Susannah L. Dean
2. The Submarine H. L. Hunley: Confederate Innovation and Southern Icon, by Steven D. Smith
3. Fortifying the Landscape: An Archaeological Study of Military Engineering and the Atlanta Campaign, by Robert J. Fryman
4. An Irishman Dies at Antietam: An Archaeology of the Individual, by Stephen R. Potter and Douglas W. Owsley
5. The Battle of Cool Spring, July 16-20, 1864, by Joseph Whitehorne and Clarence R. Geier
Part II. The Home Front and Military Life
6. "For the Convenience and Comforts of the Soldiers and Employees at the Depot": Archaeology of the Owens' House/Post Office Complex, Camp Nelson, Kentucky, by W. Stephen McBride, Susan C. Andrews, and Sean P. Coughlin
7. Defending the Capital: The Civil War Garrison at Fort C. F. Smith, by Joseph Balicki
8. The Sheridan Field Hospital, Winchester, Virginia, 1864, by Joseph W. A. Whitehorne, Clarence R. Geier, and Warren R. Hofstra
9. Far from the Battlefield: Archaeology at Andersonville Prison, by Guy Prentice and Marie C. Prentice
10. Antietam: The Cultural Impact of Battle on an Agrarian Landscape, by Elise Manning-Sterling
11. "Four Years of Hell": Domestic Life in Harpers Ferry during the Civil War, by Paul A. Shackel
12. "The Colored Laborers Work as Well as When Slaves": African Americans in the Breadbasket of the Confederacy, 1850-1880, by Kenneth E. Koons
13. "Free within Ourselves": African American Landscapes at Manassas National Battlefield Park, by Laura J. Galke
14. Battling beyond First and Second Manassas: Perseverance on a Free African American Farm Site, by Erika K. Martin Seibert and Mia Parsons
Part III. New Methods and Techniques
15. The Archaeology of Retreat: Systematic Metal Detector Survey and Information System Analysis at the Battlefield of Chickamauga, September 1863, by John E. Cornelison, Jr.
16. Surveying the Civil War: Methodological Approaches at Antietam Battlefield, by Bruce B. Sterling and Bernard W. Slaughter
17. Archaeological Interpretations of the Battle of Antietam through Analysis of Small Arms Projectiles, by Bruce B. Sterling
18. Double the Cannister and Give ‘Em Hell: Artillery at Antietam, by Jeffrey Harbison

Clarence R. Geier, professor of anthropology at James Madison University, is coeditor of Look to the Earth: Historical Archaeology and the American Civil War. He has directed and collaborated on historical archaeology projects at the battlefields of Third Winchester, Cool Spring, and Cedar Creek and has conducted research at the site of the Sheridan Field Hospital. His most recent work has focused on the interpretation of the Confederate military complex of Fort Edward Johnson/Camp Shenandoah in Augusta County, Virginia.

Stephen R. Potter, regional archaeologist with the National Park Service for the National Capital Region, has overseen archaeological research at Harpers Ferry National Historical Park, Manassas National Battlefield Park, and Antietam National Battlefield. His work was featured on "Death at Antietam," a television program produced by the Learning Channel. He is the author of Commoners, Tribute, and Chiefs: The Development of Algonquian Culture in the Potomac Valley.

"Articles about civil and military conflicts on most continents are published in newspapers daily . . . The book vividly links current events and our own nation's history that many of us take for granted." "Regardless of their interest in the Civil War or military history . . . Every archeologist deserves to have this volume on their bookshelf." - Dr. Andrea Lee Novick, Office of State Archaeology, North Carolina Department of Cultural Resources
--SEAC

"A powerful collection of 18 original and insightful essays that illustrate that the archeology of the Civil War is not just about finding bullets and buttons; it is about real people." ; "A must read for students of the Civil War." ; "Many of these essays succeed in presenting a unique understanding of the role of the common individual during this crucial time in American History. It is a valuable resource for anyone interested in African-American studies, agricultural history, and domestic life in the 19th century."
--CRM Journal

"A very well illustrated--especially with maps and photographs of recovered artifacts--well written, and thought provoking gem. It should make professional and avocational historians take note that archaeology has much to offer to the interpretation of history."
--AASHL--History News

"Detailed enough for a specialist to appreciate, yet will not overwhelm the interested generalist with technical minutiae. Highly recommended.
--Civil War Books and Authors

"An important and timely introduction to an aspect of historical archaeology that has been under-reported in the professional literature.
--Society for Archaeological Sciences Newsletter