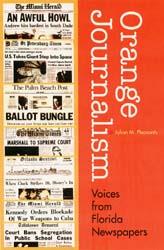 Newspapers in Florida are generally regarded as among the best in the country. Despite its image as a modern sun-and-fun frontier state filled with eccentrics, corrupt politicians, and feuding immigrant communities, Florida has become an economic, political, and social juggernaut that continues to have a significant impact on America. Orange Journalism presents 18 writers, editors, and publishers who have nurtured and influenced the high quality of print journalism in Florida during the last half-century.


Focusing on both the daily and the weekly press, this oral history includes candid interviews with such visionaries as Al Neuharth, who founded USA Today, and such prominent writers as Carl Hiaasen and Rick Bragg. The book features conversations with sportswriters, investigative journalists, editorial cartoonists, Pulitzer prize-winning writers, and the publishers of an African American and a Spanish-language paper. It also includes interviews with publishers of large state newspapers (David Lawrence of the Miami Herald); medium-sized papers (Diane McFarlin of the Sarasota Herald Tribune); and smaller weeklies (the colorful Tommy Green of the Madison County Carrier). It covers the state geographically, with journalists from all major newspaper chains in Florida as well as a rapidly dwindling group of independent newspapers, primarily the St. Petersburg Times.


For students of the Fourth Estate, these lively interviews offer insights about the status of women in a traditionally male profession; the impact of new technology on newspapers; and management differences between large national conglomerates and state newspapers. The book also explores ownership issues between corporate conglomerates and family-owned and independent papers. For general readers, the comments on topics like race, class, drugs, and tourism and observations on specific issues such as civil rights in Miami and the growth of the space industry and Disney World illuminate the important role that Florida newspapers play in politics, economics, and the environment. Personal and relevant, Orange Journalism delivers the inside scoop on a profession that serves as the eyes and ears of the public.

Julian M. Pleasants, director of the Samuel Proctor Oral History Program and professor of history at the University of Florida, is the author or editor of several books, including most recently Buncombe Bob: The Life and Times of Robert Rice Reynolds.

" Lively and engaging, the intervews offer insight about the status of women in a traditionally male profession, the impact of new technology on newspapers, and management differences between large conglomerates and state papers."
--CLASnotes

"accurate, insightful, a pleasure to read, and an important contribution toward recording the history of Florida newspapers during the twentieth century." "Orange Journalism is a valuable addition to Florida's historical archives, and should be of interest to anyone who wants to know more about newspapers or the sunshine state."
--H-Net Reviews