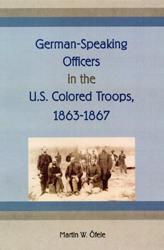 "The first work on foreign officers in the U.S. Colored Troops deals extensively with the relationship between black soldiers and white officers in these units. . . . An important contribution to the history of the Civil War and the issue of ‘what they fought for,’ of the political and ideological stance of German ethnics, and of the history of black Americans in the era of emancipation."--Walter D. Kamphoefner, Texas A&M University

While the experiences of ethnic minorities in the Civil War have received increased attention in recent decades, the varied and not always easy relations between immigrants and African-Americans participating in the struggle have attracted scant notice. This study explores the motivations of German-speaking immigrants in the U.S. Colored Troops (USCT) and the sometimes hostile, sometimes sympathetic reactions of their American comrades and enemies in the conflict. Some immigrants were ardent abolitionists, others just color-blind enough to accept African-Americans as their new fellow countrymen, and still others adopted racist views. The story of German officers in the USCT is an important facet of the history of race relations between immigrants and African-Americans in the 19th century.

Apart from explaining how many German-Americans reflected on issues such as emancipation or the Union, Öfele also raises contemporary questions about national and ethnic identity and assimilation of minorities in white societies. The USCT substantially contributed to many Union victories and helped shape relationships between whites and blacks in the army for many decades to come. It also offered new possibilities for advancement for foreigners who, owing to nativist tensions, were often barred from promotion in the volunteer forces.

Drawing mainly on primary sources and personal documents including letters, diaries, memoirs, and military service and pension records, Öfele provides a new perspective on the role of German-Americans in the Civil War and the reasons for and consequences of their decision to join the minority corps of the Union Army.

Martin Öfele is assistant professor of American history at the University of Munich and the author of four books on the U.S. Civil War published in Germany.

"Ofele's superbly researched analysis of German-speaking officers in the U.S. Colored Troops (U.S.C.T) is an important book. It lies at the nexus of ethnic and African American historiography." "Outstanding and groundbreaking piece of scholarship."
--Journal of Military History

"Places the civil war in a transatlantic context." "Contextualizes the events of the 1860s in the United States within the history of the growth of European nationalism, the revolutions of 1848, and circulating ideas about race."
--H-net reviews

"Ofele significantly expands our understanding of the Civil War with this important study. "The fact that such a book has seen the light of day is a testament to the editor's desire to bring something innovative and conceptually sophisticated to the field and to the author's scholarly ability to deliver an outstanding book. Thanks to both, the body of ethnic studies related to the Civil War is growing as deep as it is wide."
--Journal of Southern History

"A well-underpinned and impressive piece of scholarship on an arcane but quite interesting subject."
--American Historical Review

"A remarkably thoughtful analysis of the backgrounds and motivations of his subjects and of the greater German American community . . . Well written, balanced, and perceptive . . . based on solid primary sources from American and European archives . . . a welcome addition to the literature on the ethnic communities of Civil War America."
--The Journal of American History

"Ofele offers an overdue study of the interaction between German-speaking officers and the African-American soldiers who served under their command in the United States Colored Troops." "A significant contribution to the scant literature on German and African-American relations during the nineteenth century, a difficult topic to research."
--Journal of American Ethnic History

" Öfele's work breaks new ground with this first study of German-speaking officers in the USCT during the Civil War, and no doubt it will be the point of departure for future work on the topic."
--Civil War Journal

"A well-researched and argued work on the little known topic of German-American officers in the U.S. Colored Troops… His book does much to illuminate the confusion concerning these 'Dutchmen' that existed in the U.S. military during the 1860s."
--Southern Historian

"The result of vast and meticulous research… The book is a welcome addition to the body of work concentrating on the Civil War, especially on the USCT during the conflict, and the German-American experience during that era."
--H-Net.org

...a rich and thoroughly researched monograph that explores the backgrounds, motivation, wartime experiences, and postwar fates of a select group of immigrants.
--H-Net Reviews

" The rich core of the work is not only the definitive work on German-speaking officers in African American Civil War units, but both building block and methodological model for future studies."
--American Studies