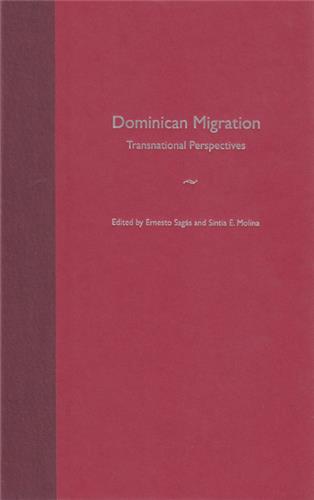 "This volume sets a new standard in studies that focus on the continuous and evolving process of transnationalization . . . a valuable collection of details and insights into the interchange of people, capital, goods, information, ideas, and influence that exemplify the evolving reach and complexity of the Dominican transnational experience."-- Hector R. Cordero-Guzman, Baruch College, City University of New York

Political and economic hardships have led over one million Dominicans to leave their homeland and settle in foreign countries--the United States, Spain, Venezuela, and other countries in Latin America and Europe. In essays covering subjects from politics to literature, this interdisciplinary work analyzes the Dominican diaspora as a multifaceted global phenomenon in which Dominican transmigrants live, work, and participate in two or more societies. It examines the forces that fueled the diasporic migration of Dominicans; the characteristics of the migration process; the main challenges to political and social incorporation; the formation of communities in New York, Spain, and other locales; and issues of gender in education, employment, and the household. It also includes a discussion of the Dominican migration experience as portrayed in the works of two prominent Dominican-American novelists, an analysis of images and perceptions of New York City as reflected in literary production, and an essay on the development and redevelopment of Dominican music and dance as it matures within the community, fusing with other musical traditions in New York City.

"This book strengthens transnationalism as a conceptual framework through which we can better understand Dominican diasporic experiences and those of transmigrant communities at large."
--New West Indian Guide

Race and Politics in the Dominican Republic