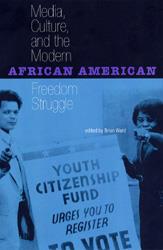 "A dazzling array of essays that vastly expands our understanding of the role of the media and popular culture in the politics of race. From Andy Griffith to Amiri Baraka, from Leadbelly's blues to "Sweet Sweetback's Baaadassss Song," this is a brilliant and irreplaceable collection."--Timothy B. Tyson, University of Wisconsin-Madison, author of Radio Free Dixie: Robert F. Williams and the Roots of Black Power

Stimulating and insightful, these essays on the relationship among the media, popular culture, and the postwar African American freedom struggle offer new perspectives on the nature of the Civil Rights Movement and its legacies. At the same time, they suggest how much the struggle itself shaped important trends in American culture and mass media in the 1950s and 1960s. Bringing together a range of voices seldom heard together, this book challenges readers to reconsider the ways in which a simplistic "master narrative" of the Movement has come to dominate popular, and even some scholarly, understandings of the meaning of the freedom struggle.

Introduction: Forgotten Wails and Master Narratives: Media, Culture, and Memories of the Modern African American Freedom Struggle, by Brian Ward
1. The Media and the Movement: Looking Back from the Southern Front, by Julian Bond
2. A Media-Made Movement? Black Violence and Nonviolence in the Historiography of the Civil Rights Movement, by Jenny Walker
3. Black-Oriented Radio and the Civil Rights Movement, by Stephen Walsh
4. Reclaiming the South: Civil Rights Films and the New Red Menace, by Allison Graham
5. Hip Like Me: Racial Cross-Dressing in Pop Music Before Elvis, by David Chappell
6. “Climbing the Mountain Top": African American Blues and Gospel Songs from the Civil Rights Years, by Guido van Rijn
7. Free Jazz: Musical Style and Liberationist Ethic, 1956-1965, by Peter Townsend
8. Jazz and Soul, Race and Class, Cultural Nationalists and Black Panthers: A Black Power Debate Revisited, by Brian Ward
9. Villains, Demons, and Social Bandits: White Fear of the Black Cultural Revolution, by William L. Van Deburg
10. "Pimpin' Ain't Easy": Work, Play, and "Lifestylization" of the Black Pimp Figure in Early 1970s America, by Eithne Quinn
11. Mau-Mauing the Filmmakers: Should Black Power Take the Rap for Killing Nat Turner, the Movie? by Scot French
12. “The 1960s Echo On": Images of Martin Luther King Jr. as Deployed by White Writers of Contemporary Fiction, by Sharon Monteith
13. The Power of Martyrdom: The Incorporation of Martin Luther King and His Philosophy into African American Literature, by Trudier Harris


Brian Ward, associate professor of American history at the University of Florida, is the author of Just My Soul Responding: Rhythm and Blues, Black Consciousness and Race Relations and coeditor of The Making of Martin Luther King and the Civil Rights Movement.

"provides an extended historical context for the emergence of the black freedom struggle and gives insight into how it shaped trends in American culture and mass media. In its attention to how the legacies of the civil rights and black power movements impact current race relations, this book offers an alternative direction for educators to confront history." - Journalism History
--Journalism History

"a volume that briskly carries the reader through five decades of mass media manifestations of the civil rights movement. This tour is not comprehensive but incisive, offering close analysis of a sample of vexing problems. The sharpness of the analysis and the coherence of the essays, however, combine to offer a compelling new depiction that will be of great interest to any student or scholar of the movement." - Arkansas Historical Quarterly
--Arkansas Historical Quarterly

"By helping to blaze a new path to familiar destination, Media Culture and the Modern African American Freedom Struggle, makes a significant contribution to the historiography of the Movement." - H Net Book Review
--H-Florida

"There is tremendous value in having these perspectives together in a bound volume and having the kind of detailed thought and critical analysis provided in the essays. It illustrates the importance of studying media issues from a variety of disciplines. Students of mass communication, Black studies, American Studies, and History should find these readings particularly satisfying."
--Journalism & Mass Communications Quarterly