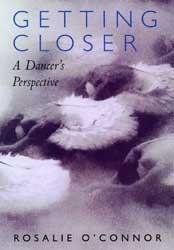 Getting Closer
A Dancer's Perspective

"Rosalie shows us the soul of the artist."--from the foreword by Julio Bocca, principal dancer, American Ballet Theatre

Former American Ballet Theatre dancer Rosalie O'Connor gives us an intimate look at one of America's greatest dance companies, a glimpse of unforgettable moments both behind the curtain and onstage during her 15 years with the company.

O'Connor's black-and-white images capture the emotions of dancers and choreographers at their most unguarded--intense, vulnerable, exhilarated, and exhausted. Because of her position with the company, O'Connor had unlimited access to her colleagues and an unrestricted view from the wings. Her photos record the dancers' rigorous daily routines in rehearsal studios and their pre-performance preparations. The images reflect the trust and familiarity between O'Connor and her fellow dancers. And they catch breath-taking moments in performance as a dancer attains the height of a leap or executes a perfect arabesque.

This book documents the company from 1996 to 2002. O'Connor provides the story behind each photo and quotes from the dancers themselves. Dance luminaries also offer brief comments and insights: Natalia Makarova on how she passes on the tradition of classical ballet through coaching; Mark Morris about his approach to restaging his own work; Susan Jaffe on the final bow of her career; and Alessandra Ferri on dancing opposite Julio Bocca's Romeo.

Mikhail Baryshnikov invited O'Connor to join the ABT in 1987, and she danced in roles choreographed by such icons as George Balanchine, Antony Tudor, and Agnes de Mille. After winning a dance photography contest in 1996, she was invited to create a photo gallery that would represent ABT on their newly created website. She began toting cameras and film in her ballet bag, and the assignment became part of her daily life. When she suffered a serious foot injury in 1997, the photography became therapeutic and life-affirming. During the nine months she was unable to dance, she stayed actively involved with the company through photography and discovered that all she knew as a dancer could inform her eye as a dance photographer.

This handsome collection is a testament to her inner resolve, as well as a portrait of the private and public worlds of ballet.

Rosalie O'Connor was a professional dancer with the American Ballet Theatre until her retirement in 2002. She was the photographer for the School of American Ballet's 1999 Workshop Book and has photographed ABT dancers for the company's annual directories. Her photographs have been published in a variety of magazines, including Vogue and Vanity Fair, and displayed in solo exhibits at the Lincoln Center in New York City and the Kennedy Center in Washington, D. C.

"Who better to "choreograph" via photography the dancer's life than a dancer? "Provides a wonderful intimacy." "From scenes of Jerome Robbins' Fancy Free to close-ups of all important makeup applications, O'Connor's photos, with accompanying text from dancers, make an indelible impression."
--Booklist

"Delivers on the promise of its title, presenting a series of striking black and white photographs."
--www.dance-teacher.com

"O'Connor's timing for the right moment for an unusual pose is uncanny." "University Press of Florida is to be lauded as emerging as the publisher of books on dance."
--Dancer

"In the ephemeral world of dance, pictures exist as an irreplaceable treasure trove. And no one makes photographic mementos quite like former American Ballet Theater dancer Rosalie O'Connor."
--Time Out New York

". . . those unforgettable and unexpected moments during rehearsal and on stage that no other photographer would find. She dances with her subjects."
--Dancer