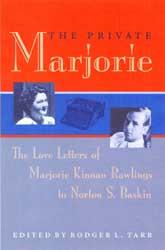 "Rawlings is a witty, acute, funny, and moving storyteller. . . . There is no doubt that these letters are a significant contribution to the study of American literature, both for insight into Rawlings and her work and her commentary on the literary scene."--Veronica Makowsky, University of Connecticut

"Offers revealing and often poignant insight into the heart of a hard-drinking, wise-cracking, tough-talking woman who was also a hunter and a pioneer, a businesswoman, a crusader, and a first-class writer."--John Lowe, Louisiana State University

This extraordinary trove of letters offers the most intimate portrait available of Marjorie Kinnan Rawlings, the Pulitzer-Prize-winning novelist best known as the author of The Yearling, Cross Creek, and South Moon Under. Rawlings was one of Scribner's best-selling novelists of the 1940s and a protégée of their famous editor Maxwell E. Perkins.

The letters, written to her second husband Norton S. Baskin from 1938 to her death in 1953, present a sharply drawn picture of the nation as it struggled through the end of the Depression, World War II, and the beginning of the Cold War era and of her intriguing life that ranged from the Florida scrub to the New York literary scene. Above all, they reveal the temperamental writer at her most human--candid, bawdy, lonely, insecure, generous, and always fortified by her love for Baskin.

Their relationship was deep and abiding but not without upheaveal, pain, and complications. They lived apart as much as they lived together, and during the writing of these letters Rawlings was an international celebrity. Baskin shared Marjorie with the world and she shared with him her views on life as a writer and as a woman in a man's world. For nearly 18 months during his wartime service, she wrote him a letter every day--an epistolary diary of her personal and professional tragedies and triumphs.

The letters are especially lively when Rawlings chronicles her life at Cross Creek, her home in remote north-central Florida. Her language in these letters reveals her tough, enigmatic personality. She was sometimes unkind, particularly when it came to comments about her black workers, whom she championed in the abstract but often cursed in person. She dealt in the same way with her cracker neighbors, whom she treated with uncommon charity at times and with contempt at others. The letters also describe friendships with Perkins and with her publisher, Charles Scribner III, and his daughter Julia, her unofficial goddaughter and later her literary executor; with socialites who visited St. Augustine, Florida, where Baskin owned a posh hotel; with the rich and famous Owen D. Youngs of Van Hornesville, New York; and with writers as diverse as Ernest Hemingway, Robert Frost, Margaret Mitchell, and Zora Neale Hurston. One of the latter, her friend and fellow novelist James Branch Cabell, convinced Rawlings to write a biography of writer Ellen Glasgow, a contemporary best-selling writer and a friend of both. Although Rawlings died before she could complete it, these letters reveal the sensational secrets divulged to her by Glasgow's Richmond intimates.

Near the end of Rawlings's life, when she was worn out by illness, alcohol, and depression, Baskin remained her champion, always listening to her complaints and indulging her whims. In this unvarnished narrative we come to know, as he did, an American writer who was a complex personality, as hard on herself as she was on those she loved.

"Entertaining." "They describe her life at Cross Creek--fishing, hunting, and berry-picking--as well as her visits to New York, Richmond, and the North Carolina mountains. And they include literary moments too: a visit from Robert Frost, gossip about Ernest Hemingway and Rawlings's response to a (sincere? Mocking?) offer from fellow Florida author Zora Neale Hurston to help Rawlings out with her domestic chores."
--Wall Street Journal (Eastern Edition)