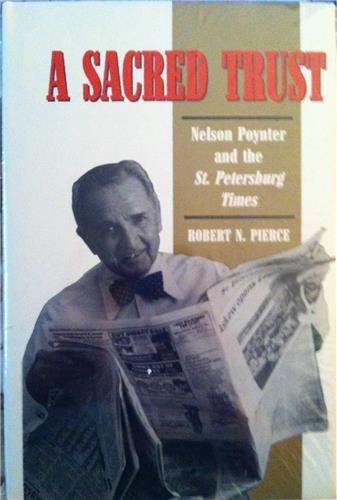 A Sacred Trust:
Nelson Poynter and the St. Petersburg Times


"An important contribution to the understanding of publishing, power, the history of journalism and Florida, and the possible effect of a magnificent obsession. . . . skilled and largely unbiased . . . as good an example of the impact of an individual on events as can be written."--Ed Johnson, senior editor, New York Times Regional Newspaper Group

One of the country's most respected newspapers developed in tandem with the sometimes paradoxical life of Nelson Poynter, its owner for three decades until his death in 1978. The St. Petersburg Times, once an unremarkable daily read mainly by the residents of Pinellas County, Florida, gained (as a result of Poynter's obsessive demands) an international reputation for journalistic innovation and quality.
Poynter believed that a newspaper is a sacred trust. He set a national standard by using color graphics and photos to tell complex stories. He was one of the first to launch a crusade for good writing, and he refused to kowtow to community opinion. "In Florida's largest bastion of Republicanism, it kept intact its reputation as the state's most liberal editorial voice," Pierce writes. "It exhorted its readers to change their minds on gun control, Contra aid, and capital punishment." The Times gave its readers what it thought was good for them, whether they liked it or not.
Equally paradoxical was Poynter's legacy. His will set in motion a unique experiment in U.S. journalism management that made public service, not money-making, the moving force and primary responsibility of a news medium. This procedure left ownership of the paper to an educational institute, but gave total control to a series of chief executives, each of whom would choose a successor.
Any corporate history is a suspicious undertaking, and the author writes in the preface that he was wary at the outset, recognizing that "the Times's extraordinary story had taken on mythical dimensions as told by true believers among its executives." The book is nevertheless as objective as biography can be. The author has interwoven Poynter's life and death not only with the tempestuous and highly relevant history of his own family but also with the major themes in the newspaper's evolution, and he locates all of these in the context of national and state history and of journalistic development.

In the end, though, it is "a story of human beings, some brilliant, some obsessed, all with limitations, [who] somehow . . . worked together to fashion a newspaper unlike any other."

Robert N. Pierce, professor of journalism at the University of Florida, is a former newspaper reporter and editor and the author of Keeping the Flame: Media and Government in Latin America.

Pierce manages to weave his biographical narrative through the entire book, while also telling much about St. Petersburg, modern journalism, and, most important, Nelson Poynter and his newspaper.
--Mississippi Quarterly

"This book by Robert N. Pierce is an absorbing, meticulously documented history of the distinguished southern daily and its publisher's related journalism activities." "Pierce invested eight years in researching and writing A Sacred Trust. The result is one of the finer journalism history books in the United States."
--Gulf Coast Historical Review