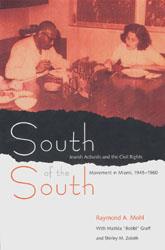 South of the South:
Jewish Activists and the Civil Rights Movement in Miami, 1945–1960


"A must-read for anyone interested in the history of civil rights, the roles and varied motivations of southern Jews in the movement, the interaction of blacks and Jews, the role of hate-groups and the anti-communist hysteria in silencing or harassing the forces of positive change, and the specific place of Miami, Miami Beach, and Florida in the struggle. Raymond Mohl's writing style is dynamic and fully accessible for the lay as well as scholarly audience that I expect this work will attract."--Mark K. Bauman, Atlanta Metropolitan College

He describes the city's political climate after the war as characterized by segregation, aggressive anti-Semitism, and a powerful strain of cold war McCarthyism. In this hostile environment the dynamic leadership of two northern newcomers, Matilda "Bobbi" Graff and Shirley M. Zoloth, played a critical role in the city's campaign for racial reform. Working with the Miami chapter of the Civil Rights Congress, established in 1948, Graff was instrumental in the organization's stand against the Ku Klux Klan, its protests against lynchings and police brutality, and its work with Florida's black civil rights leaders such as Harry T. Moore. With the Miami Congress of Racial Equality, Zoloth helped to launch a lunch counter sit-in campaign (a year before the more famous student sit-ins of 1960) that ultimately resulted in the desegregation of downtown public accommodations.

This analysis of the movement between 1945 and 1960 substantiates a new but now dominant interpretation of civil rights history that sees grassroots action as the powerful engine that drove racial change. It emphasizes the major role played by women in the cause and documents the variety of civil rights experiences of Jews who migrated to Miami in large numbers during the mid-century decades. Committed to social justice, they built activist organizations, challenged segregationists and anti-Semites, and worked with black activists to break down Jim Crow barriers.

Original documents written by both women, including Graff's autobiographical memoir, demonstrate a level of Jewish activism, especially by women, that was unique for the time and place--the postwar American South. Their own words vividly describe fear, harassment, family and community pressures, government intrigue, and individual betrayal. As Mohl's groundbreaking history illustrates, the perseverance of these women and their small band of supporters is a testament to their strength and an inspiration for continued reform in America.

Raymond A. Mohl, professor of history at the University of Alabama, Birmingham, is the editor of Searching for the Sunbelt: Historical Perspectives on a Region and the coeditor of The New African-American Urban History and Urban Policy in Twentieth-Century America

"Will surely inspire a new generation of scholars to explore Miami's Civil Rights era and yield new insights for veteran scholars ofFlorida history as well." ; "Mohl has given us another pioneering effort - and one that will certainly inspire and shape new work on Miami's history, its women, and the Civil Rights movement alike."
--H-Net

"Mohl has given us another pioneering effort--and one that will certainly inspire and shape new work on Miami's history, its women, and the Civil Rights Movement alike."
--H-Net Reviews

"An exemplary case study of the civil rights movement in Miami that reverberates beyond its boundaries."
--Southern Jewish History

"Adds significantly to the growing body of work highlighting the emergence of the Civil Rights movement immediately following the Second World War, the role of women (particularly those who came of age in the 1930s and 1940s) in the movement's initial stages, and local community efforts to overcome racial barriers."
--AJL Newsletter

"Unearths the activities of two brave Jewish women who traveled from relative safety directly into the line of fire in the almost completely segregated city of Miami, Florida." "Though they never met each other (Graff and her family were driven out of Miami in 1954, the year that Zoloth arrived), they had friends and principles in common and shared a dedication to the struggle against racism." "A worthy effort to bring back an unexamined period in the nation's life before the sit-in movement of the early '60s began."
--Jewish Currents

"South of the South demonstrates the ongoing urgency and vitality of civil rights historiography."
--The Journal of American History

"This book serves its purpose in confirming that historical change depends upon the willingness of nonconformists to work toward and pay the price for social justice. But South of the South is even more valuable for historians, thanks to Raymond A. Mohl's deft introduction to the documents that make up two-thirds of the text."
--The Journal of Southern History