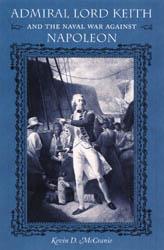 Admiral Lord Keith and the Naval War against Napoleon

"A classic biography of an important Royal Navy admiral of the Age of Sail."--William H. Flayhart, III, Delaware State University

"[This] superbly researched biography of Admiral Lord Keith . . . is likely to be the last word on the subject. . . . An important contribution to our understanding of the history of the Royal Navy in the Age of Fighting Sail and also of the British conduct of the French Revolutionary and Napoleonic Wars."--David Syrett, Queens College, CUNY

Lord Keith, a Scottish admiral who rose to prominence serving His Majesty from 1761 to 1815, ended his career by overseeing Napoleon's surrender in 1815. Born George Keith Elphinstone, Keith at one time or another held nearly every important command in the British navy, and his story illustrates the navy’s history during the Age of Fighting Sail.

McCranie's book is the first modern biography of Keith, who learned the art of commanding single ships and small squadrons during the American Revolution. Keith eventually commanded four major fleets--the Eastern Seas, the Mediterranean, the North Sea, and the Channel. Though he never led a fleet into battle, Keith supported joint operations with the British army and its allies while simultaneously maintaining command of the sea and ensuring the free passage of commerce.

A skilled administrator, who at times controlled more than 200 ships over thousands of square miles of ocean, Keith successfully navigated the political and social waters as well. Drawing on more than 100,000 private and public records, McCranie documents Keith's dealings with the British government, the Royal Family, the Admiralty, the French government, the French navy, the British army, and Britain's allies.

Citing letters Keith wrote to his wife, his sister, his oldest daughter, and his father, to whom he described his first impressions of the navy, the author offers a personal portrait and narrative of a career-conscious officer who worried about what others thought of him. This book will appeal to historians of the Royal Navy, the French Revolution, and the Napoleonic era, as well as enthusiasts of the Age of Fighting Sail.

...a very good book, one that utilizes Keith's career as a lens through which to view the larger history of the Royal Navy during the Age of Revolution…an elegantly written study of one of the most important figures of the French and Napoleonic Wars.
--H-Maritime

This fine and detailed biopgrahy is very much a "warts and all" view of a man with a notable 54-year naval career.
--Ships and Shipping

McCranie has done an important service in setting Keith's personality against the situations in which he found himself to explain a career which deserves to be better known.
--Journal of Military History

…a fine treatment of Admiral Lord Keith, a very competent commander whom glory eluded, sometimes by the narrowest of margins.
--International Journal of Maritime History

…the most comprehensive biography of the Admiral to date. …a delightful read.
--History Matters: An Undergraduate Journal of Historical Research

" McCranie displays a delicate judgment in assessing Keith's decision making and responsibility in the many operations in which he was involved over the course of twenty years."
--The Historian

" The most substantial work on Keith. That McCranie's biography of Keith is a useful contribution to our understanding of the Royal Navy of the latter eighteenth and early nineteenth centuries is beyond doubt."
--H-Net Reviews