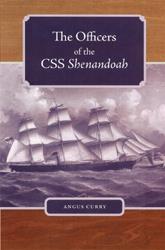 The Officers of the CSS Shenandoah

"Angus Curry has written a wonderful book about the Confederate commerce raider that was successor to the better known CSS Alabama. This is not just another book on CSS Shenandoah. Curry does what no other writer has done so successfully: he allows the reader to experience the cruise through an intimacy with the ship’s officers. As the reader becomes familiar with their human frailties, it becomes all the more remarkable what these men were able to accomplish. Curry has critically examined ships’ logs, journals, letters, and post-war memoirs and produced a scholarly yet fascinating account of the cruise. The CSS Shenandoah can now be recognized as more than a footnote in Civil War history. Angus Curry has written a highly readable book that should be read by both naval historians and general readers alike. It will remain the definitive book on CSS Shenandoah--Norman C. Delaney, Del Mar College "An original and fast-paced interpretive history of the CSS Shenandoah, one of the Confederacy’s most successful and controversial commerce raiders. Drawing upon new sources, and revisiting an arsenal of old ones, Curry dissects the CSS Shenandoah’s rich history."--John David Smith, series editor, from the foreword

The Confederate Steam Ship Shenandoah is renowned as the last vessel to surrender after the Civil War, and the young officers on board--who didn't learn of the war's end for three months--consequently suffered extraordinary physical and emotional stress. This first-hand account of the crew's hazardous last year, told through shipboard diaries and postwar journals, reveals the heavy personal toll they paid during the cruiser's transition from commissioned commerce raider to hunted fugitive.

Many of the Shenandoah’s officers had resigned commissions in the United States Navy to fight for the South. Curry examines how their social and professional backgrounds shaped them as leaders and how their expectations clashed with the realities of military rule, chronic personnel shortages, and harsh conditions at sea. He explores the ethical problems faced by Confederate naval personnel who participated in attacks on civilian maritime commerce, and he describes the kinds of rationale employed by the Southern officers to justify their duties.

He also reveals the tension that developed between the cruiser's commander, Lieutenant James I. Waddell, and his subordinates. In frequent public and private outbursts, the officers expressed dissent about the manner in which Waddell operated. After learning of the Confederacy's defeat and being forced into exile, they argued over the appropriateness of their actions, and for years after the war were plagued by accusations of "mutiny" and "piracy." Curry also follows the process by which the former naval officers concealed controversial aspects of the last voyage of the CSS Shenandoah in their public recollections, showing how postwar experiences shaped and reconstructed their memories of sea duty.

Angus Curry is honorary associate of the history program at La Trobe University in Melbourne, Australia.

…as full and complete a study on the subject could be desired. …a carefully wrought and scholarly account of a fascinating and in many ways tragic Civil War adventure.
--International Journal of Maritime History

"... details the extraordinary tensions aboard this floating contradiction. In the absence of a Melville or a Conrad, Curry successfully resurrects unquiet ghosts."
--ustralian Financial Review Magazine

…as full and complete a study on the subject as could be desired. …a carefully wrought and scholarly account of a fascinating and in many ways tragic Civil War adventure.
--International Journal of Maritime History

…lively and well written… Anyone who has read previous works about the CSS Shenandoah would be served to read this book, as it may just change his or her perspective on the ship's history.
--The North Carolina Historical Review

…an important addition to the history of the Confederate navy.
--Journal of Southern History

" Especially interesting because it focuses on a cultural and psychological profiling of her Southern officers and their motives and concerns which affected the voyage and its outcome."
--The Northern Mariner