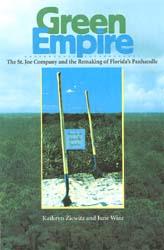 Green Empire
The St. Joe Company and the Remaking of Florida's Panhandle

"Green Empire has implications far beyond Florida's panhandle. The book reminds us that throughout much of America…. the fates of open landscapes are intricately tied to the missions of the people and corporations that own the land."---Bloomsbury Review

"A groundbreaker in Florida's environmental history. . . . Should be on the bookshelf of anyone interested in the history and future of development in Florida and elsewhere."--Gulf South Historical Review

"A persuasive call to citizens and government to insist upon a greater public interest."--Tallahassee Democrat

Since the Great Depression, the St. Joe Company (formerly the St. Joe Paper Company) has been Florida's largest landowner, a forestry and transportation conglomerate whose influence has been commensurate with its holdings. The company owns nearly one million acres, mainly in northwestern Florida, where undeveloped coastal and riverside landscapes boast some of the state's most scenic and ecologically diverse areas.

For 60 years, the company focused on growing trees, turning them into paper, and managing its ancillary businesses. In the late 1990s, the company shifted directions: it sold its paper mill, changed its name, and launched a concerted drive to turn its natural-resource assets into greater profits. Today the St. Joe Company is a critical and fiscally powerful force in the real-estate development of northwest Florida, with access to the most influential people in government.

Based on hundreds of sources--including company executives, board members, and investors, as well as outside observers--this factual and balanced history describes the St. Joe Company from the days of its founders to the workings and dealings of its present-day heirs. For anyone concerned with land use and growth management, particularly those with an interest in Florida's fragile wildlife and natural resources, Green Empire will illuminate the issues surrounding the relationship between one of the most ambitious players in Florida's real-estate market and the state's last frontier.

Kathryn Ziewitz is former director of the St. Andrews Project and currently a high school teacher in Bay County, Florida. June Wiaz has worked at the U.S. Environmental Protection Agency and for the American Association for the Advancement of Science.

"A thought-provoking look at an unfolding chapter in the history of a state and country that have always equated growth with progress and a narrowly defined quality of life."
--H-Florida

"By putting a "For Sale" sign on the panhandle, they write that St. Joe has challenged citizens to create their own vision for the region or else accept company plans "firmly rooted in dollars."
--Northwest Florida Daily News

"Seldom has a company's history been laid out so succinctly or so well. And with the stage set the authors carefully unfold a tale of how St. Joe Paper Company, the cash cow that was supposed to underwrite the charitable work of the duPont Trust, evolved (or was evolved) into the St. Joe Company, a land developer giant that, as the subtitle so accurately puts it, is 'remaking the Florida Panhandle'."
--The Anniston Star

"Green Empire has implications far beyond Florida's panhandle. The book reminds us that throughout much of America, and especially in the rural American West, the fates of open landscapes are intricately tied to the missions of the people and corporations that own the land."
--The Bloomsbury Review

"A persuasive call to citizens and government to insist upon a greater public interest."
--Tallahassee Democrat

"Does not whitewash over the reasons the company is controversial today, and yet it does not read as a diatribe." "In many ways, this is a song of the South. But it will look terribly familiar to those living in coastal areas throughout the country."
--E-Streams

"This volume is a groundbreaker in Florida's environmental history." "Should be on the bookshelf of anyone interested in the history and future of development in Florida and elsewhere."
--Gulf South Historical Review

"More than just a story of recent and projected change in this neglected region, Ziewitz and Wiaz have contributed to what some might call a First World political economy and political ecology."
--The Professional Geographer

…covering everything from the company's early days to its current standing as Florida's greenest real estate company.
--Florida International Magazine