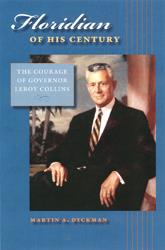 Floridian of His Century
The Courage of Governor LeRoy Collins

"This is a very interesting and well-written story of the inspirational life and challenging times of LeRoy Collins of Florida. Martin Dyckman has captured the essence of the man and gives a rare look at his inner struggle with his long-held beliefs on racial segregation. He reveals to the reader the courage of the man once he came to believe that justice demanded a change in his position, he courageously and dramatically gave voice to that change. His lunch-counter speech gave hope to the cause of civil rights and inspiration to those who followed to carry on the fight.
Governor Collin’s great story-telling ability with his wit and humor is shown in so many stories, which are wonderfully entertaining and enjoyable to read. This book is a great read and I highly recommend it." --Reubin O’D. Askew, Governor of Florida 1971-1979

"Martin Dyckman is the most distinguished Florida journalist of his generation: thorough, fearless and stiletto-sharp. His biography of LeRoy Collins, the most important Florida governor of the 20th century, displays those signature qualities and more. Collins helped to drag Florida out of the Old South into the modern world, an act of bravery and, some said, political suicide. He remains a monument to integrity and conscience, a reminder of a lost time when Florida's leaders weren't afraid to do the right thing. Dyckman's superb book, written with passion and wit, tells Collins' story as no one else could." --Diane Roberts, NPR correspondent and author of Dream State: Eight Generations of Swamp Lawyers, Conquistadors, Confederate Daughters, Banana Republicans, and Other Florida Wildlife

Praise for Martin Dyckman:
"Some snarly souls, including the politicians who curse his name, will rejoice over the news [of his retirement], but Floridians who believe government should be open, ethical and compassionate will miss his passionate voice. Martin is more than a first-rate journalist; he is first and foremost a concerned citizen who cares deeply about his state and his country. To him, journalism is, at its best, a form of public service." --Philip Gailey, St. Petersburg Times

Six years after his election as a segregationist, Florida governor LeRoy Collins denounced racial discrimination as contrary to “moral, simple justice.” In 1991, the Florida House of Representatives eulogized Collins as the “Floridian of the Twentieth Century,” and today Collins is remembered as one of Florida’s outstanding governors. As champion against rural misrule in 1954 and as the voice of racial moderation in 1956, Collins won the two most important gubernatorial elections in Florida history. In Floridian of His Century, a political portrait of this controversial Southern governor, Martin Dyckman argues that Collins’s courageous moral leadership spared Florida the humiliation that befell other states under less enlightened leaders.

While his home-state rivals and other Southern leaders preached defiance of the U.S. Supreme Court’s desegregation decisions, Collins’s conscience and faith persuaded him there was no justification for segregation. At President Lyndon Johnson’s request, Collins became the first Director of the Community Relations Service agency formed under the 1964 Civil Rights Act—a post that would take Collins to Selma for the infamous Selma to Montgomery voting rights march. It was Collins who, in the wake of the bloody attack on the demonstrators by Alabama authorities, arranged for a peaceful conclusion. But his mission became fuel for a racist backlash when Collins ran for the U.S. Senate in 1968. Although the defeat ended his political career, it did not diminish Collins’s pride in his record or the hope that in time his principles would prevail.

"a wonderfully written slice of Florida history with the thirty-third governor of Florida as the distinctive centerpiece."
--Winter Haven News Chief

…excellent life-and-times biography of Florida's 29th governor…one of the best Florida political histories in print of the second half of the 20th Century.
--The Lakeland Ledger

This book is a must read for native-born and adopted Floridians. It depicts with honesty, humor, and admiration a gentle courageous leader who promised to "do the right thing" and did it.
--ocala.com

" Deserves a place on the shelves of any person interested in the tumultuous political history of Florida during the period of the 1950s and 1960s. Martin Dyckman has written a highly readable, insightful, and sometimes challenging volume that treats LeRoy Collins as something more than the sainted figure he is sometimes portrayed as being. In Dyckman's narrative, Collins emerges instead as a real person, with his courageous charcter helping to overcome his flaws."
--Tampa Bay History

Reubin O'D. Askew and the Golden Age of Florida Politics
A Most Disorderly Court: Scandal and Reform in the Florida Judiciary