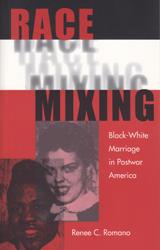 "The culmination of a prodigious excavation from a wide and fascinating array of sources, including African American publications and archives that are often overlooked. Romano shapes this material into a lively narrative that will be enlightening to experts in the history of black-white relations as well as to general readers."--Randall Kennedy, author of Interracial Intimacies: Sex, Marriage, Identity, and Adoption

"Romano is to be commended for tracing with equal care the evolution of black and white opinions about interracial marriage and gender differences within each group."--The Journal of American History

Marriage between blacks and whites is a long-standing and deeply ingrained taboo in American culture. On the eve of World War II, mixed-race marriage was illegal in most states, politicians argued for segregated facilities in order to prevent race mixing, and interracial couples risked public hostility, legal action, even violence. Yet sixty years later, black-white marriage is no longer illegal or a divisive political issue, and the number of such couples and their mixed-race children has risen dramatically. Renee C. Romano explains how and why such marriages have gained acceptance, and what this tells us about race relations in contemporary America.

Although significant numbers of both blacks and whites still oppose interracial marriage, larger historical forces have greatly diminished overt racism and shaped a new consciousness about mixed-race families. The social revolutions of the 1950s and 1960s (with their emphasis on individualism and nonconformity), the legal sanctions of new civil rights laws, and a decline in the institutional stability of marriage have all contributed to the growing tolerance for interracial relationships. Telling the powerful stories of couples who married across the color line, Romano shows how cultural shifts are lived by individuals, and how these shifts have enabled mixed couples to build supportive communities for themselves and their children.

However, Romano warns that the erosion of this taboo does not mean that racism no longer exists. The history of interracial marriage helps us understand the extent to which America has overcome its racist past, and how much further we must go to achieve meaningful racial equality. Race Mixing will be welcomed as a text for classes in history, sociology, and African American studies.

Renee Romano is associate professor of history at Wesleyan University.

"Romano has probed this most vilified of social phenomena in clear, well-written prose and her book is a welcome addition to postwar American social history." "Race Mixing is gracefully written, compellingly argued, and masterfully sourced. It is history at its finest."
--H-Net

"An extraordinary study documenting the historical progression of the integration of the black and white cultures in America through interracial marriage." "Very strongly recommended reading, especially for students of American culture and the civil rights ordinances."
--The Bookwatch

Romano's thorough history delves into arguments about the meaning of race, racial identity, and sexuality in America, the blurry boundaries between public and private life, and the ambiguous extent of change wrought by the black freedom struggle.
--Georgia Historical Quarterly

" An excellent source for students, scholars, and the general public interested in this important, but previously taboo, topic."
--Journal of African American History