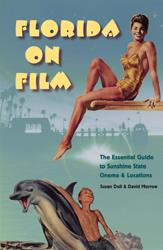 Florida on Film:
The Essential Guide to Sunshine State Cinema and Locations

"The ultimate Florida film travel guide, from detailing locations of well-known films to heralding Florida's unsung film heroes like Ricou Browning. It's a great read for Florida film buffs and an essential guide for any Florida film exhibitor."--Daniel Wester, President, Tallahassee Film Society"
"A unique compendium of Florida filmmaking that extends beyond celluloid. With a real-life 'movie tourist's guide,' Florida on Film deftly links the landscape of Florida and the history of popular culture amusements and attractions to local film history."--Denise K. Cummings, Rollins College

From the camp horror classic The Creature from the Black Lagoon to Scarface, many films have indelible connections to Florida. This guide to Florida cinema and locations reveals that the Sunshine State has been an integral part not only of America's film history but also of its cultural history.

Doll and Morrow group more than 80 films shot in Florida by theme, covering each movie with a plot synopsis, cast and credits list, and a discussion of the film's importance. They feature behind-the-scenes views of the making of each film, analyze each film's connection with its Florida locale, and offer an abundance of details and revelations about the filmmakers and stars. Each chapter concludes with a Movie Tourist's Guide to sites connected to the films that can be visited by the public. Movie fans will learn how the makers of True Lies brought stunning realism to the famed bridge sequence. Cinema scholars will appreciate the authors' attention to forgotten films and little-known pioneers from the silent era. Movie tourists will want to venture to famous locations, such as those in South Beach, where scenes from Scarface and The Birdcage were filmed. And Florida natives will enjoy the book's references to the state's history and unique attractions, including Weeki Wachee Springs, Cypress Gardens, and Ross Allen's Reptile Institute.

Florida on Film is the essential guide for anyone interested in the history of filmmaking in the Sunshine State.

For anyone going to Florida as a movie tourist (that is, as a traveler more interested in movie locations than beaches and theme parks), this is the "reel" thing.
--Chicago Tribune

For anyone going to Florida as a movie tourist (that is, as a traveler more interested in movie locations than beaches and theme parks), this is the "reel" thing.
--South Florida Sun-Sentinel

" An insightful and informative reference guide that advances our understanding of the art and craft of cinema, of the movie industry, of the role the Sunshine State played in film aesthetics, and how the study of cinema should be approached."
--Tampa Bay History