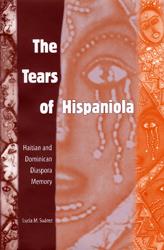 The Tears of Hispaniola
Haitian and Dominican Diaspora Memory

"The first book on the market that considers the experience of Haitians and Dominicans in the United States in one single effort of analysis and does so through the cultural venue of literary texts produced by writers from the two communities."--Silvio Torres-Saillant, Syracuse University

"A new understanding of the island of Hispaniola. . . . [This] work brings to the fore a most neglected aspect of Caribbean history--the close links between two nations, Haiti and the Dominican Republic, who are perceived as enemies but whose peoples have shared similar histories of violence and pain."--Lizabeth Paravisini-Gebert, Vassar College

The Tears of Hispaniola appraises the ways in which Haitian and Dominican diaspora writings serve as public record--documenting violence, terror, memory, and human rights violations on the island of Hispaniola, home to the two nations of Haiti and the Dominican Republic. Lucía Suárez offers a thorough and delicately nuanced reading of central works by Jean-Robert Cadet, Junot Díaz, Loida Maritza Pérez, and Edwidge Danticat, to establish the function of this literature as a socio-literary catalyst, and to bring attention to the larger injustices still occurring on the island.

Stories of a "torn country" continue to haunt the people of Hispaniola's diaspora. In their images of what they left behind and what exists today, these writers engage in a process Suárez contends can transform unspeakable truths into memoirs of survival, understanding, and resistance. She argues that as authors and intellectuals articulate traumatic memories of their homeland, and expose the intersections of new violations in their host country, their writing creates a venue to transcend violence and claim justice.

Of particular importance is how Suárez interprets these texts as a platform from which to consider questions of ethnic identity and social reform for the large and growing U.S.-Caribbean community. The author suggests that citizens of the diaspora challenge prejudices and make a distinct impact on the cultural landscape of the United States.

This is a pioneering book that offers a compassionate and constructive, comparative analysis of the literatures and societies that have emerged from Haitian and Dominican dispersion to the United States. It thus offers a critical and highly important lens toward the understanding of the links between literature, history, and memory. The Tears of Hispaniola boldly reframes Caribbean and diaspora literature in terms of a new pan-Caribbean diasporic canon in the Americas..

"Suárez shows how both the articulation of brutality as well as the sustained disregard of its existence brings about rewards and challenges. Undeterred by linguistic difference, she examines an element of Caribbean literature that has been woefully ignored. With any luck, this study will inspire other scholars to focus their attention on this unnoticed literature."
--Hispania

"An Excellent book. Compares the texts of Dominican and Haitian writers in Diaspora, reflecting on common themes--of violence and memory--based on a shared history and set of circumstances on an island called Hispanola."
--Anthrosource

"Suárez is a stellar cultural and literary critic who knows how to travel along with her text."
--The Journal of Haitian Studies

"Provides us with an extraordinarily rich model for analysis of the links between literature, history, and memory, and Pan-Caribbean diasporic canon."
--Lista Bohio