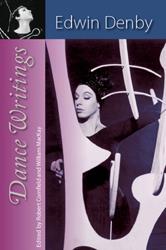 "There are great dance critics, and then there is Edwin Denby, who is in a class by himself."--Mindy Aloff, editor, Dance Anecdotes & Dance Critics Association News

Edwin Denby was the most important and influential American dance critic of the 20th century. His reviews and essays--which he began writing in the late 1930s and continued to write for almost thirty years--were possessed of a voice, vision, and passion as compelling and inspiring as his subject. As dance critic, first for Modern Music and then for the New York Herald Tribune, and as a contributor to numerous magazines and journals (Ballet, Dance Magazine, Mademoiselle, and Evergreen Review among them), Denby permanently changed the way we think and talk about dance.

This volume presents his reviews from Modern Music and the Tribune in chronological order, providing not only a picture of how Denby's dance theories and reviewing methods evolved, but also an informal history of the dance in New York from 1936 through 1945. Some of the reviews glimpse the vanished dancers and dances that were most particularly of their time. In others, Denby returns again and again to the four artists he considered exemplary: Alicia Markova, Alexandra Danilova, Martha Graham, and George Balanchine. It was Balanchine on whom Denby focused after he left the Tribune, and all of his post-Tribune writings on Balanchine and the New York City Ballet are presented here in one section, providing a history of the early artistic development of the company and of Balanchine himself, while also showing Denby's most eloquent and deeply felt writing.

Finally there are his post-1945 reviews, essays, and lectures on such general dance subjects as the phenomenon of a truly good leap, classicism in ballet, and dance criticism itself. Here as elsewhere in the collection, the simple elegance of his writing, its evocative power, and its extraordinary timelessness make it an essential part of our dance literature.

Edwin Denby (1903-1983) was the author of Looking at the Dance and Dancers, Buildings, and People in the Streets, Collected Poetry, and three librettos for American composer Aaron Copland.

...presents his reviews from 1936 through 1945, and essays on seminal figures, including George Balanchine, Martha Graham, and Frederick Ashton.
--The New York Times--Paperback Row

…it is a pleasure to welcome back into print Dance Writings.
--St. Petersburg Times

…as fresh and relevant today as it was when it was written.
--Attitudes:The Dancers' Magazine