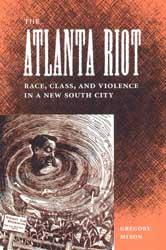 The Atlanta Riot
Race, Class, and Violence in a New South City

"A signal contribution to scholarship in African-American, southern, and U.S. urban, social, labor, and political history. [Mixon] shows how the social dynamics of race and racism overwhelmed class divisions among whites and set the foundation for the explosive Atlanta Riot of 1906. . . . Well-written, tightly structured, and clearly and convincingly argued."--Joe William Trotter, Carnegie Mellon University

Gregory Mixon traces the roots of the Atlanta Riot of 1906, exploring the intricate political, social, and urban conditions that led to one of the defining events of race relations in southern and African-American history. On September 22, 1906, several thousand white Atlantans rioted, ostensibly because they believed that black men had committed "repeated assaults on the white women of Fulton County," according to newspapers at the time. Four days after the massacre began, 32 people had died and 70 were wounded.

Mixon acknowledges the traditional interpretation of factors that precipitated the riot--postbellum race relations and the codification of Jim Crow, an inflammatory press, and the race-baiting tactics of the gubernatorial candidates Hoke Smith and Clark Howell. But he argues that a complex coalition of Atlanta's white commercial and civic leaders also contributed to political divisions within Georgia's Democratic Party and to the riot as well. As Atlanta's elite crafted new forms of segregation and modes of disempowering blacks (and also working-class whites), Mixon says, their machinations led directly to the tragedy.

At the turn of the 20th century, urbanization and industrialization were changing Atlanta's racial boundaries, and black Atlantans aspired to be city builders both in their neighborhoods and in greater Atlanta. They competed with whites for jobs and public space. The growing autonomy and political influence of blacks threatened white supremacy, Mixon says, and the violence of 1906 was an attempt by Atlanta's elites to reaffirm their dominance.

Mixon also documents the activism of the city's black elite, especially professors and administrators at Atlanta University, including W.E.B. Du Bois and John Hope, and ministers, most notably Rev. Henry Hugh Proctor. While they defended all blacks against notions of racial inferiority and worked to improve the lives of the poor and uneducated of both races, they nonetheless criticized members of the black working class for "irregular" work habits and "destructive" use of their leisure hours.

Looking at both white and black issues in the growth of Atlanta, this book establishes a context for racial violence in the city, the state, and the region. It also raises broader questions of conflicting agendas among whites and blacks that defined labor, politics, and urban space in the New South.


Gregory Mixon is assistant professor of history at the University of North Carolina, Charlotte.

"Ought to be mandatory reading for those students of Southern history who confine themselves to Civil War gallantry."
--Charlotte Observer

"The definitive treatment of the 1906 Atlanta race riot" "Mixon's trim text provides succinct analysis of the cuases, action, and resolution of the riot that immobilized the 'city too busy to hate' in the fall of 1906."
--Georgia Historical Quarterly

"Tells an important story about the tightening grip of white domination over African American life in Atlanta."
--Journal of American Ethnic History

"Intriguingly suggests that southern urban white elites both provoked white violence against African Americans, and sought to distance themselves from the social mayhem of that violence. Mixon's book amply repays reading for its meticulous documentation of that insight and for its status as the most comprehensive available analysis of the 1906 Atlanta Riot."
--American Historical Review

"With Mixon's gem of a volume, we understand the influence of ideas on mobs and the power of mobs to inspire ideas like the rule of law, which presented one of the best hopes for overcoming racial violence."
--The Journal of Southern History

"Clear and concise, yet wide-ranging in its approach… Mixon connects the Atlanta story with the wider history of urbanization and violence in the New South."
--Journal of American History

:An excellent account of the sequnce of events that led to the Atalnta riot of 1906 . . . A highly competent scholarly work, which shows how the history of riots and violence should be written."
--The Journal of Social History

…clearly demonstrates the methods of the white elite in achieving a racial dominance in Atlanta that made it a "prototype metropolis of twentieth-century America."
--Historian

Comparing the Atlanta riot with those in cities such as Wilmington, Mixon provides national context for racial violence.
--The Historian

…The Atlanta Riot reveals a southern "progressive" city strained by race, economics, urbanization, industrialization, and a bitter struggle for political control at the beginning of the 20th century. …outstanding, detailed, and thoughtful historical analysis of the early 20th century American race relations, urbanization, industrialization, and southern history.
--The Journal of African American History

…reveals a southern "progressive" city strained by race, economics, urbanization, industrialization, and a bitter struggle for political control at the beginning of the 20th century.
--The Journal of African American History

…reveals a southern "progressive" city strained by race, economics, urbanization, industrialization, and a bitter struggle for political control at the beginning of the 20th Century.
--The Journal of African American History