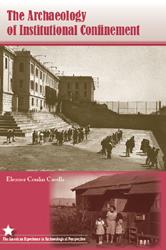 The Archaeology of Institutional Confinement

"A work that will aid tremendously in both the exploration of changes in institutionalization as well as the archaeological study of institutions."--David R. Bush, Heidelberg College

The study of American institutional confinement, its presumed successes, failures, and controversies, is incomplete without examining the remnants of relevant sites no longer standing.

Asking what archaeological perspectives add to the understanding of such a provocative topic, Eleanor Conlin Casella describes multiple sites and identifies three distinct categories of confinement: places for punishment, for asylum, and for exile. Her discussion encompasses the multifunctional shelters of the colonial era, Civil War prison camps, Japanese-American relocation centers, and the maximum-security detention facilities of the twenty-first century. Her analysis of the material world of confinement takes into account architecture and landscape, food, medicinal resources, clothing, recreation, human remains, and personal goods.

Casella exposes the diversity of power relations that structure many of America's confinement institutions. Weaving together themes of punishment, involuntary labor, personal dignity, and social identity, The Archaeology of Institutional Confinement tells a profound story of endurance in one slice of society. It will illuminate and change contemporary notions of gender, race, class, infirmity, deviance, and antisocial behavior.

Eleanor Conlin Casella is senior lecturer in archaeology at the University of Manchester.

"Clearly written, well illustrated." "Unlike many volumes devoted exclusively to prisons, it opens out onto the widely varied manifestations and true historical depth of the impulse to confine."
--Winterthur Portfolio