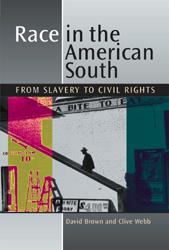 Race in the American South
From Slavery to Civil Rights

"An admirably extensive and useful survey of the racial experience of the American South since colonial times. Judicious, up-to-date, and alert to the wider context. . . . A welcome synthesis of a daunting historiography."--Richard Carwardine, Rhodes Professor of American History, Oxford University

"A stunning achievement. Easily the best overview that we have of race in the American South from the origins of slavery to the present day."--Tony Badger, Paul Mellon Professor of American History, University of Cambridge

"Race in the American South takes us on a sweeping synthetic analysis of an issue central to an understanding of American history. Little that is relevant seems to have escaped the attention of the authors."--Richard J. M. Blackett, Andrew Jackson Professor of History, Vanderbilt University

This is the first book to offer an over-arching view of the ways race has indelibly shaped the history of the United States. David Brown and Clive Webb trace the turbulent course of southern race relations from the colonial origins of the plantation system to the maturation of slavery in the nineteenth century, through the rise of a new racial order during the Civil War and Reconstruction, to the civil rights movement of the twentieth century.

While the authors recognize the very different racial balances in different parts of the region, the divisions among southern whites, and the non-racial basis of many aspects of southern distinctiveness, they convincingly put forward the case that the driving engine of Southern history is the attempt to resolve the dilemmas posed by the racial issue. They focus on the omnipresent racial basis of the changes over time in the region's politics, economy, and social structure, as well as other main areas of study in American history including culture, class, and gender.

"Brown and Webb do a remarkable job with this giant undertaking. Race in the American South is a deep synthesis of many disparate fields and serves as a strong historiographical reference guide. Is a reference for all who are engaged in these topics and an in-depth introduction for those who aspire to be more engaged in them."
--H-Net

…an extensive and useful survey of the region's racial experience beginning with the colonial era's plantation system to the maturation of slavery in the nineteenth century, through the rise of a new social order during the Civil War and Reconstruction, to the civil rights movement of the twentieth century.
--The Courier: Tennessee Historical Commission

"Blessed with a willingness to confront the more difficult topics such as the stand of American revolutionaries on slavery or the ambiguous issues associated with mid-19th-century emancipation, Brown and Webb make an important contribution."
--Choice

"Will benefit students who want an introduction to the complex histories of race and racism or to the scholarship that informs this discourse. The authors are especially successful in emphasizing the diversity of racial ideas and experiences among southerners."
--The Alabama Review

"This highly accessible book is a fine overview of the literature and will prove useful in courses on race relations, African America, and the South."
--The Journal of Southern History

"Deserves a place of prominence on the bookshelf of any serious student of the American South."